Lori Sneed remembered as Ole Miss ‘Rebel with a cause’ 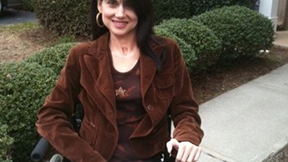 Lori Sneed may have been the truest definition of a Rebel with a cause that most of us have ever witnessed.

She was paralyzed since 1991, after a late-night car accident during her freshman year at Ole Miss, but walked tall and proud with warmth, wit and confidence despite a wheelchair.

Sneed, of Gulfport, died this week from liver cancer, and friends throughout Mississippi are mourning the girl with the most beautiful eyes – literally, she was a two-time winner of the Most Beautiful Eyes on Campus contest, one claimed before her accident and another after.

Many of us remember the heartbreaking news of the accident in 1991 that left Lori paralyzed. She and friends from Ole Miss had been at a concert. Someone else was driving. The vehicle flipped. Her life changed in an instant.

The daughter of well-known, active Ole Miss alums John “Shorty” and Patti Sneed of Gulfport, Lori became a symbol for many of how to fight back from the most difficult adversity. She and her parents had learned from the courage of the late Chucky Mullins, the paralyzed Ole Miss football player (1989) who later died from complications due to his accident.

She worked hard at rehabilitation and miraculously returned to Ole Miss as a student within two years, this time in a wheelchair, participating as a full and active student down to her beloved sorority (Pi Beta Phi). Many of us remember her bounding across campus in her chair with the ease of her fleet-footed peers.

And, we remember her steadfast “don’t feel sorry for me” mantra that became her cause.

Lori graduated from Ole Miss in 1997 and went to work for CNN in Atlanta in public relations – emerging immediately as both a talent and a delight, according to those who worked with her — “she was a flash and a force” up and down the hallways of the news network.

Consider this one story from co-worker Daryn Kagan, reported in 2012 in the Springfield News Sun:

“ ‘Lori,’ I told her, ‘I’m having a holiday party at my house. I’d love to invite you, but my house sits atop 20 stone steps. It couldn’t be less wheelchair accessible.

“ ‘No problem,’ she said.  I thought she was just graciously thanking me for thinking of her. I was wrong.

“ ‘Just save me a parking space out front,” she instructed. ‘I’ll call you when I get to your house so you can send five of the cutest guys at the party out to carry me up those stairs. Remember, it’s really important that they’re cute!’

“That was the day I realized what I love about my friend. No matter what life throws at her, she’s determined to come to the party.”

Lori had to leave CNN in 2006 after her intestine ruptured and she suffered a severe bought of sepsis. She went into a coma for 77 days and ultimately needed brain surgery.

It meant letting go of much of her active city life, one that included stand up comedy routines and parties. But it didn’t mean letting go of her dreams, her faith and her many wonderful relationships, a wide stable of family and friends who held and will always hold her in a very high place.

She will be missed, but her courage and ability to rise high above the biggest challenges will long be remembered. She was a Rebel with a cause — an inspiration for us all.

David Magee is Publisher of The Oxford Eagle. He can be reached at david.magee@oxfordeagle.com