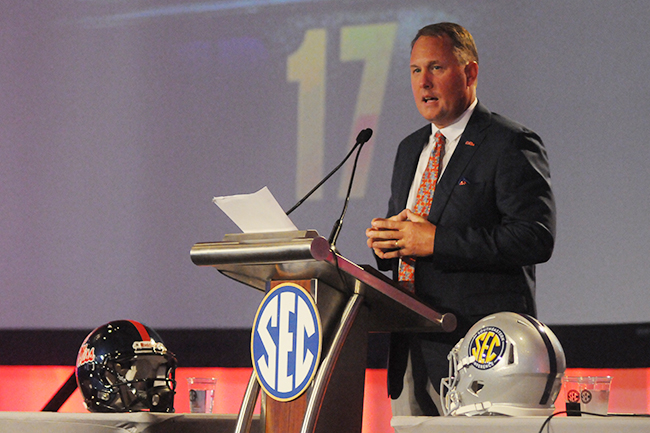 HOOVER, Ala. — It’s not that Hugh Freeze doesn’t want to talk about Houston Nutt’s lawsuit or the rest of the NCAA’s investigation into the Rebels’ football program.

It’s that he really can’t, he said.

A day after Freeze’s predecessor filed a defamation lawsuit against the school in U.S. District Court for the Northern District of Mississippi, Freeze was mostly mum on the topic during his appearance at Southeastern Conference Media Days on Thursday. In the suit, Nutt accuses the school of a “false and misleading PR scheme” for the way it responded to the original Notice of Allegations it received in January 2016 and claims that Freeze, athletic director Ross Bjork and other school officials worked together to “carry out a carefully orchestrated misinformation campaign” that pinned more violations on Nutt’s tenure than was accurate.

“I would love to share my opinions on it, but it’s a legal case and I just can’t comment on it,” Freeze said when asked about Nutt’s claims. “I’m not at liberty to do that.”

The suit being filed less than 24 hours before Freeze made his rotation at the league’s unofficial kickoff to the season caught Freeze’s attention.

“It seems a bit ironic that the timing was what it was, but it is what it is,” Freeze said.

Freeze was peppered with inquiries about the NCAA’s long-running probe throughout the day but largely took the same approach. He referenced the school’s response to the NCAA’s Notice of Allegations when asked how much he could talk about the investigation and repeated that while reading from a prepared statement in front of hordes of reporters inside The Wynfrey Hotel’s main ballroom.

Ole Miss, which is facing 15 Level I charges that include failure to monitor against Freeze and a lack of institutional control, filed its 124-page response to the amended NOA in May. The NCAA is expected to respond with its case summary by the end of the month.

A bowl ban for the 2017 season and 11 scholarship reductions over four seasons are among the penalties Ole Miss has already self-imposed.

“We’re at the stage where we feel like we’ve taken responsibility and now it’s time for us to get our day in front of the Committee on Infractions and hopefully have a fair outcome and then be able to move forward,” Freeze said. “That’s the day we’re looking for. Everything else you’ll have to read in our response. That’s kind of the state of mind I’m in right now is we’ve taken responsibility, which I’ve always said there will come a day where we have to be held accountable and then we’ve got to go and share our side of things and hash that out with the Committee on Infractions hopefully soon.”

“I can’t discuss it. We’ve been asked not to, and I’m going to honor that.”

As for how Nutt’s suit affects the pair’s relationship, Freeze said there’s not much there to sour.

“I don’t think I’ve spoken to him since I begged him to keep me,” Freeze said. “I think I did see him at a Chick-fil-A golf tournament. I think a lot of Houston.”