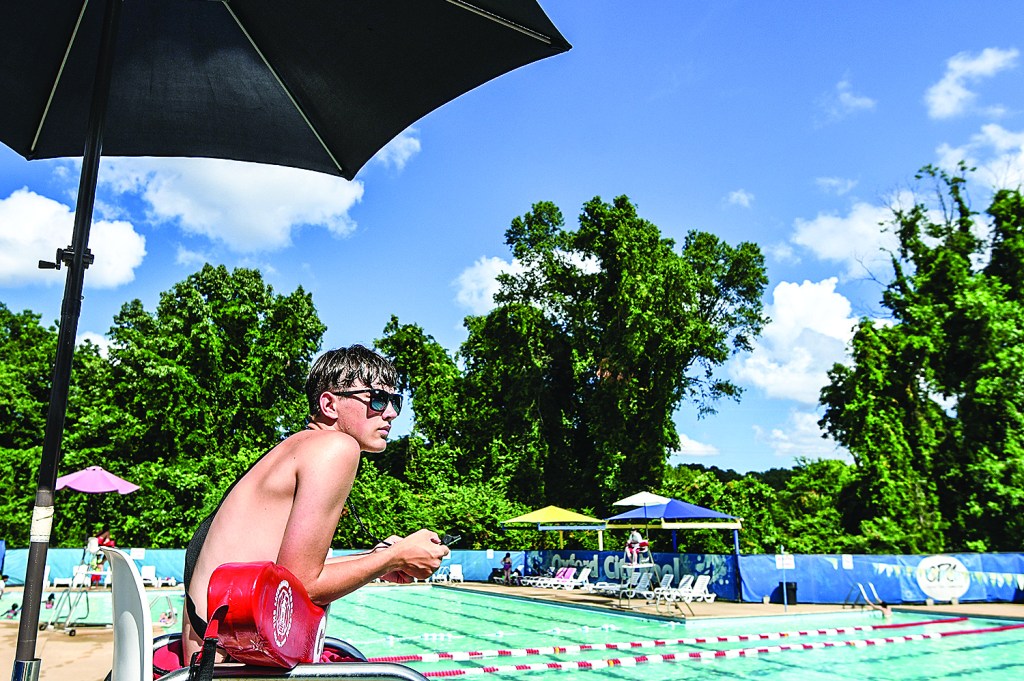 Lifeguard Logan Bay looks out over the Oxford swimming pool on Tuesday, June 13, 2017. The pool will open for the season on May 26. (Photo/Bruce Newman)

A busy summer will continue with a bevy of activities set for the weekend, and coming weeks leading into the fall. The Oxford Park Commission Board was provided a full update on new projects, as well as upcoming events during their regular session meeting Wednesday.

The second of three straight Movies and Music at Avent Park will continue this Friday night. Belk Ford/Oxford Toyota will be sponsoring the latest version of “The Jungle Book.”

Less than 24 hours later, Avent will be busy again with the first of two scheduled Pop Up Water Park events. The cost to ride the slides, provided by North Mississippi Party Rentals, will be $10 per child. An armband will be sold for those who ride the slides. Parents who don’t want to ride don’t have to purchase a band in order to take part in the event that runs from 3 until 8 Saturday evening.

The final Family Night at the Oxford City Pool will take place this coming Tuesday. Attendance at the prior events was deemed good, but the hope is for more members of the community to take part. Cost is just $10 for immediate family members to enter. It runs from 7 until 8:30 that evening.

Final numbers for youth soccer registration were discussed at the board meeting. Over 700 youth were signed up to play in the fall season, which was an increase over last fall and the largest number in five years. One of the events that will involve the soccer teams will take place on Sept. 23. In an effort to celebrate Get Outdoors Day, league teams are set to play games at the fields located at Sardis Lake. There will be other events, like canoeing and sailing, attached to the day.

In other matters, the board approved the hiring of three new lifeguards at the pool in the effort to keep the schedule working as it has been this summer.

Felisa Bonner was hired by the board as a recreation director. Bonner has extensive experience working with Special Olympics and individuals with physical and developmental disabilities.

The board also approved the hiring of a part-time receptionist, Molly Tidwell, at the activity center.

Surplus equipment, including a washer, dryer and refrigerator, was approved by the University of Mississippi.

New mirrors, 26 feet by 6 feet, were approved to be purchased for the gymnastics room at the activity center.

Wednesday was the final meeting for board member Marvin King, who will be replaced in the coming month with an appointment from the city board. The board will meet again on Aug. 9.