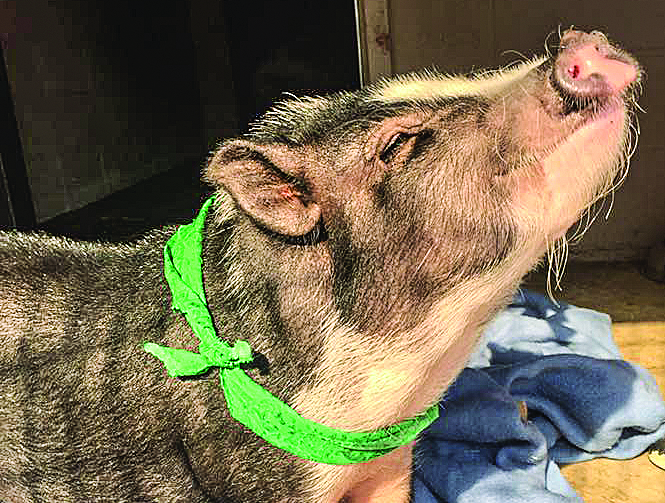 Mavis, a potbelly pig, has become a celebrity since the Oxford-Lafayette Humane Society posted a video of her on social media.

Oxford has been home to many notable people. The obvious ones being Faulkner and the Mannings, but Oxford’s newest celebrity isn’t a person at all; rather it’s a pig — who thinks it’s a dog.

Meet Mavis the potbelly pig. Mavis is the star of a viral video posted by The Oxford-Lafayette Humane Society. Mavis was surrendered to the local animal shelter two weeks ago. It wasn’t until the Facebook video posted on July 11 that she got the much-deserved publicity.

The video features the 6-month-old pig doing a trick for a dog treat. Mavis’ trick, while not overly impressive but incredibly cute, attracted almost 130,000 views, easily being the most viewed video on the Oxford-Lafayette Humane Society Facebook page. The next most viewed video posted by the humane society has just 4,000 views.

Brandee Ledene, Adoption Counselor and Animal Control Officer at the Humane Society, explained why Mavis is unlike other pigs.

“Ironically, this is not the first pig we have gotten here,” she said. “This is the first domesticated pig in the past three years that I’ve been here that I’ve seen come in the door.”

Mavis, like any good house pet, is potty trained too.

“She is completely liter-boxed trained,” Ledene said. “She will not go in the house.”

Before the video was posted, Mavis had plenty of visitors, but there were no serious inquiries for adoption.

“I figured the Facebook post would push that along a bit,” Ledene said. “Even though we had her in a foster home after foster home, it’s really not fair for her to not have that permanent feel, so I really wanted to find her someone that would give her that home sense.”

For now, it would appear that the most popular pot-bellied pig in Oxford is set to join a family. The Facebook video caught the attention of a family who is ready to open up their home to Mavis. But Mavis won’t be the only pig in the house. The family is also the proud owner of a 4-month -old potbelly pig.

Hopefully, the younger pig won’t live under the shadow of her new adopted famous sister Mavis and learns some tricks of her own.