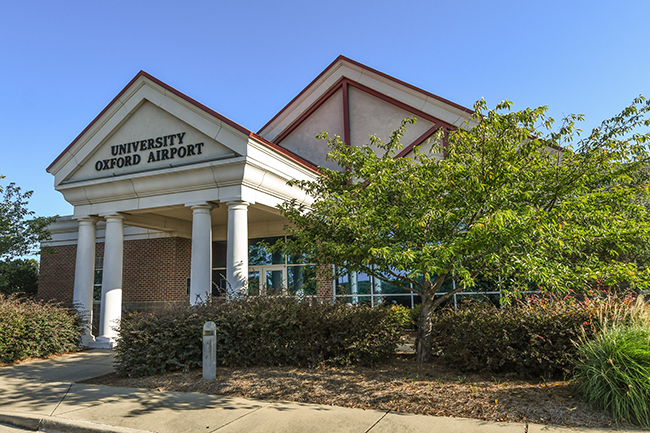 The University-Oxford Airport received a $216,000 grant from the Mississippi Department of Transportation to be used in upgrading the aircraft refueling system. (Photo/Bruce Newman)

The University-Oxford Airport will receive more than $216,000 from the Mississippi Department of Transportation to upgrade its aircraft fuel system, according to a statement released Wednesday by Transportation Commissioner Mike Tagert.

The grant will also go toward the installation of a new 25-galleon fuel tank.

“These grant funds are vital to our efforts to improve our community’s airport facility and operations,” said Mac McManus, manager of the local airport.

“This grant ensures that the University-Oxford Airport will have sufficient jet fuel,” said McManus, who added that the university appreciates the continued financial support and assistance it gets from all local, state, regional and federal officials.

“In this particular instance, these funds are coming from MTC (Mississippi Transportation Commission) and MDOT (Mississippi Department of Transportation), so we want to thank our state transit officials for these grant monies that will be enormously beneficial to the entire LOU community,” McManus said.

The Mississippi Transportation Commission recently approved MDOT to award grants to regional and municipal airports, ports, public transit systems and railroads throughout north Mississippi. The Oxford-University Airport was one of 10 airports in north Mississippi to receive grants. Other grant awards included:

“The projects these grants are funding will support existing jobs and create new opportunities for the citizens of north Mississippi, while also boosting the local economies,” Tagert said Wednesday in a press release.

Grants were also awarded to other forms of alternative transportation including ports and railroads in north Mississippi and for public transportation transit systems including the Oxford-University Transit bus system which received $29,017 to help pay for vehicle insurance.

“Mississippi’s public transit systems play an instrumental role in providing affordable, reliable mobility options to citizens who do not own a vehicle or cannot drive,” Tagert said. “Helping these providers allows them to connect people to life’s basic needs, such as family and community events, medical appointments and grocery shopping.”

Blues Fest this weekend in the Grove at Ole…