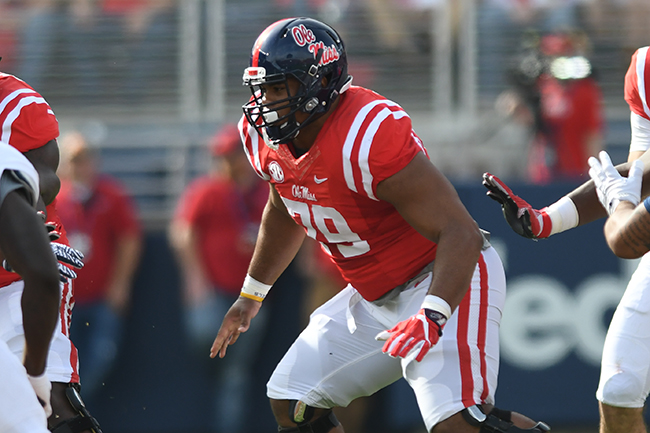 Javon Patterson is ready to go.

Ole Miss’ offensive lineman was recently cleared for full contact following shoulder surgery in the spring. Patterson underwent the procedure shortly after spring practices ended in April and said he no longer feels any pain.

A rising junior, the 6-foot-3, 314-pound Patterson is entering his second full season as the starter at left guard. The former four-star prospect has been a mainstay up front since signing with the Rebels out of Petal High in 2015, splitting six starts between right and left guard that season before starting every game last season. Three of those starts came at center.

Patterson is part of an offensive line that’s returning every starter from last season.

“I’m excited to be back out there with my teammates,” he said.

Patterson was one of four Ole Miss players to land on the preseason All-SEC team Friday as voted on by media members.

Defensive end Marquis Haynes was the Rebels’ lone first-team representative on defense. The rising senior ranks third in school history with 24.5 career sacks and fourth in tackles for loss (36.5).

Patterson, fellow offensive lineman Greg Little and kicker Gary Wunderlich made the third team. Little is entering his first season as the full-time starter at left tackle after getting five starts there as a true freshman. Wunderlich set an SEC record with a 95.7-percent success rate on field goals last season (22 of 23) and is third in school history in field goals (47) and points scored (265).

Date set for Meet the Rebels

The annual event has a new entrance this year. Fans should park in the parking garage attached to The Pavilion and enter through Gate 33 at Vaught-Hemingway Stadium and then enter the event through the team tunnel.

Admission is free, and autograph lines will be first come, first serve. Fans are limited to one autographed item per individual player or coach.