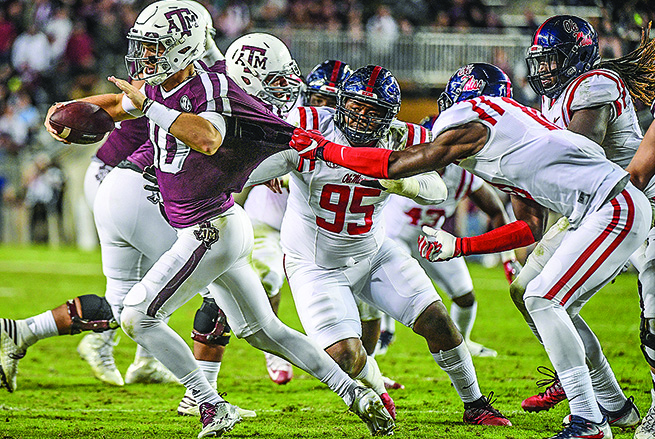 Much of the talk about Ole Miss’ defense this offseason has centered on a defensive line that’s expected to once again be the unit’s strong point.

Those playing up front are out to back it up this time.

A defense that bottomed out last season is starting over under first-year coordinator Wesley McGriff. Linebacker and secondary play were sore spots last season, but a line that performed well below its talent level is taking its share of the blame for a defense that finished 120th nationally against the run and 96th in sacks.

Any thoughts of bouncing back this season start with the first line of defense.

“We talk about (our play last season), but it’s not really a motivating factor,” defensive tackle Breeland Speaks said. “I think there’s a lot of stuff surrounding us right now with the NCAA and with how we did finish last year. Guys just want to be better regardless.”

John Youngblood, Fadol Brown, D.J. Jones and Issac Gross are gone from the rotation up front, but the group still has the defense’s lone proven playmaker in defensive end Marquis Haynes, a preseason first-team All-Southeastern Conference selection. Haynes enters his final season third in school history in sacks (24.5) and fourth in tackles for loss (36.5) after racking up a team-high 11 last season.

But Haynes is the only returning lineman to record more than one sack a season ago, leaving the Rebels looking for a complementary pass rusher to emerge. Rising junior Victor Evans and Qaadir Shepard, who’s now eligible after transferring from Syracuse before last season, are listed as co-starters at the other end spot heading into fall camp.

Former five-star signee Benito Jones showed flashes as a true freshman and may have been the Rebels’ best interior defender by season’s end, though that’s not saying much. Jones, who played in every game with four starts, had 39 tackles and 4.5 tackles loss.

Speaks went in the opposite direction. The 6-foot-3, 285-pounder followed up a promising redshirt freshman season with one in which he couldn’t hold on to his starting job because of a lack of production, finishing the season with 28 tackles and just 1.5 tackles for loss, but a strong spring has Speaks at the top of the depth chart again alongside Jones.

Freeze likes the depth the Rebels have built beyond that.

Newcomer Markel Winters could help off the edge after racking up 16 sacks and 5.5 tackles for loss at Jones County Junior College last season as a sophomore. True freshman Ryder Anderson could also see some playing time, giving the Rebels plenty of options for a deep rotation up front.

“Those guys are some deep, talented guys,” Freeze said. “I think our defensive line is going to be very solid.”

A tweak in the technique first-year defensive line coach Freddie Roach is implementing has players believing they’ll be more productive. Speaks was one of those who broke down Roach’s approach this spring — one that calls for his linemen to use their hands more to engage blockers in order to keep their head free to see what’s coming from the offense.

Whatever it takes for the group to avoid repeating what Speaks called a “very disappointing” showing a season ago.

“We’ve been working out multiple days a week as only a d-line working on technique things to get better,” Speaks said. “Coach Roach brought over a new technique from Alabama that we all just fell in love with. Guys are just making sure they’re keened in on that and making sure that they’re doing what they’re supposed to and play that perfect technique every time.”