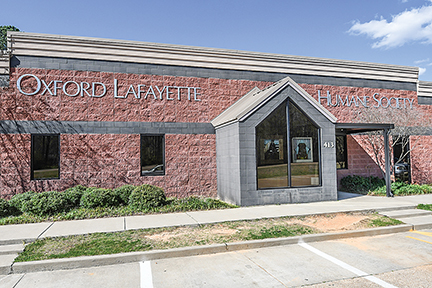 The Oxford-Lafayette Humane Society has had several resignations in recent days.

Internal struggles continue among board members and staff at the Oxford-Lafayette Humane Society as several staff members resigned from their jobs recently, including the director and animal control officer.

According to a statement from the OLHS board of directors sent to the EAGLE Tuesday, OLHS director Jenn Petermann and Animal Control Officer Alyce Hale, along with “some other staff members,” resigned recently from the shelter. The statement didn’t say why the staff members resigned.

“We are driving forward with great optimism. We appreciate the community volunteers and the donations that have been helping us through transition. We look forward to improving our adoption rates and encourage anyone that’s interested in adopting to stop by and see what great animals we have available,” the board wrote in its statement.

Mayor Robyn Tannehill said a small group of people asked to be on the Oxford Board of Aldermen agenda for the Aug. 1 meeting to discuss the OLHS; however, the group is not board members or current staff at the shelter.

The city has no governing authority over the shelter; however, the city does contract with OLHS to provide animal control services.

Conflict within the organization came to light publicly this spring when a former board member, two then-current members of the board and Hale spoke out against how some things were being handled by the OLHS executive board, specifically, having little-to-no say in how a $600,000 donation was being spent.

Executive board members said the donation was always intended to build a low-cost spay and neuter clinic inside the shelter. Some members, mostly speaking to the EAGLE on anonymity, said they felt they didn’t have much say on how the donation was used and felt there may be better ways to spend the funds, whether increasing transfer of shelter animals to shelters up north or capital projects at the current shelter.

Two weeks later, the OLHS board nominating committee sent letters to two board members informing them that while their service to the board was appreciated, their service was no longer required.

It was unknown Tuesday if the staff members and Petermann’s resignation were related to the donation and low-cost clinic.