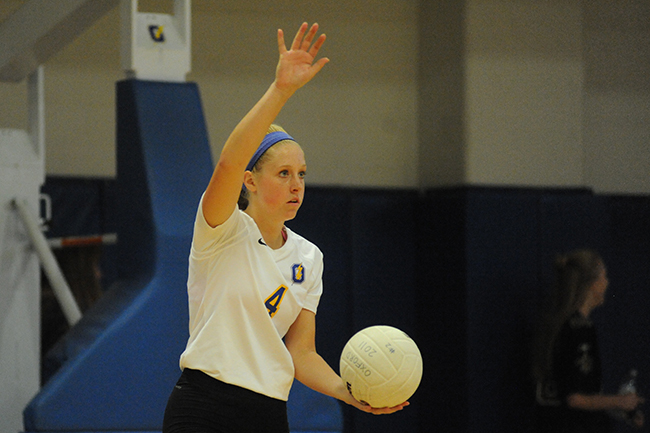 Jordan Freeze leads a group of Oxford seniors who will lead the Chargers into Class III for the first time in program history. (Bruce Newman)

A step up in competition, a new coach, loss of valuable production. Those are the usual suspects on a checklist of a team who faces a ‘rebuilding year.’
Every team except Oxford.

The Chargers are coming off their first state championship in 18 years after defeating Lewisburg last October. They are also coming off the losses of longtime head coach Tara Ross, who retired at the end of last season, and the 2016 EAGLE Player of the Year in Maggee Hobson, who graduated. Do not forget to throw in the moving up to Class 6A.

One issue was resolved late in the Spring when Kacie Hengler was hired to replace Ross. It is now Hengler’s job to figure how to resolve the other two issues at hand. So far she is facing them head on.

Since mid June, when the team could begin practicing, Henlger has been working them double time with what she called ‘double days’ in the beginning. Those days included practice time on the beach court at her house then going to the indoor court for evening practices.

“It is my style in the sense that I think beach improves everybody’s quality of play,” Hengler said. “They’re kind of forced to get outside of their box. Instead of just playing one position they have to kind of learn every skill and then some when they’re out on the beach. I just feel like it makes them a better, well-rounded player.”

Along with the loss of Hobson, four other seniors departed including Haley Caradine, Ragan Freeze and Summer Batoon. All five were vital in the Chargers’ run to a Class II state title last fall. Replacing them are a group of seniors, who saw action as juniors a year ago. Jordan Freeze leads that group.

There was not a major learning curve between Hengler and her players as there usually is with a new coach coming in. Hengler is involved with the Oxford Premier Volleyball club and through that has become very familiar with nearly every player on the team.

“It helps, a lot,” Hengler said. “I think I’ve coached every girl on varsity either from two years ago on my 15s team. Probably most of the juniors I’ve coached if not all of them. It helps to go in and already know at least their personalities.”

The starting lineup is nearly set in Hengler’s mind, but with three weeks before their season opening match against Lafayette on August 8 there is still a chance the rotation could be different than what she is putting on the court in their weekly Wednesday night scrimmages. The reason for feeling confident in whoever she puts on the floor is for one specific reason.

“I have a very deep bench,” Hengler said. “I feel very comfortable putting any of those girls in there to play.”

The move up to 6A (Class III) along with replacing valuable pieces from last season are obstacles Oxford will have to navigate around if they want to find themselves back at Millsaps in October playing for another state crown. The potential is there, but it might require a little more than what the Chargers had to give in 2016.

“It’s definitely achievable, but I don’t know if the girls know how much work they’re going to have to put in,” Hengler said. “It’s a matter of being disciplined. I hate to say it, but it’s not quite as much as a challenge in 5A. So, these teams are going to be a lot tougher.”