Oxford Board of Aldermen OK with parking garage design 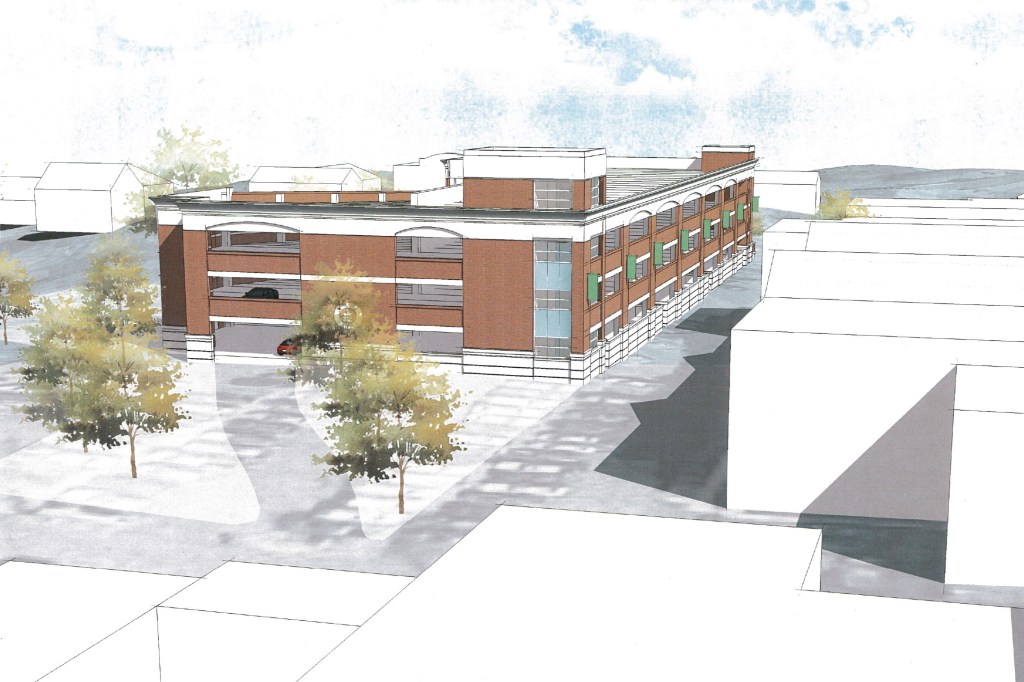 An artist rendering of the future parking garage near the Square.

While no official vote was taken, the Oxford Board of Aldermen were in agreement with the design selected for Oxford’s first downtown parking garage.

Tom Sharpe, with the Downtown Advisory Parking Commission, and Casey Rogers, with Innovative Construction Management, presented the early design drawings to the aldermen Tuesday at their regular meeting.

The commission had previously selected what they called Option B, which was 50-feet shorter than Option A.

“Option B was the one that also fit our budget of $9 million,” Sharpe said.

The garage will be built behind the Oxford-University Club and will have 410 parking spaces with about 81 surface spots remaining in the current parking lot, giving the downtown area a total of about 500 parking spaces. It will sit about 40 feet from the corner of Jefferson Avenue and have three points of ingress and egress.

“This is a work in progress,” Sharpe said. “We wanted to present the plans to you to make sure we’re headed in the right direction.”

No objections were made by the aldermen on the proposed design. The plans will go before the Courthouse Square Historic Preservation Commission in the coming weeks to gain a Certificate of Appropriateness.

Rogers also told the aldermen that recent debris found on the site of the future garage was expected and has been budgeted for.

“It won’t require additional funds for removal,” he said.

On Monday, the Oxford Public Works Department dug a test pit — an excavation made to examine the subsurface conditions on a potential construction site — on the site based on recommendations from a recent geotechnical report by Precision Engineering.

About 22 feet of construction debris — bricks, concrete, rebar — and some tires were found on the southwest corner of where the garage will be constructed.

“What we found was in line of what we were anticipating,” Rogers said. “We’re ready to move forward.”

Rogers and Sharpe said money for site clean up was already in the parking garage budget and part of the bid package for construction of the garage.

• Approved the cable TV franchise agreement with MaxxSouth Communications with the added condition that contact information is made bigger and more easily readable on their bills.

• Tabled a request from Carter & Carter Construction to conduct a concrete pour at 3 a.m. For the U-Club development off Price Street. Assistant City Engineer Reanna Mayoral said she had not been able to meet with the developers to finalize their plans and Alderman Preston Taylor said he could not support a 3 a.m. construction time in a residential neighborhood.

• Approved a five-year contract with McDonald Transportation to continue to manage the Oxford-University Transit system.