For Ole Miss quarterback Shea Patterson, becoming face of the program ‘has to happen’ 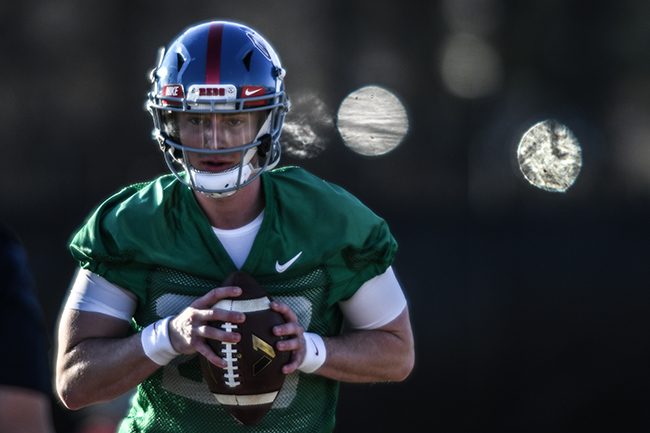 Shea Patterson’s collegiate career is three games old, but Ole Miss is counting on its young quarterback to act more like a veteran.

And it has little to do with his physical ability.

Patterson is entering his first season as the Rebels’ full-time signal caller after getting an earlier-than-expected taste of life in the Southeastern Conference last season when Chad Kelly went down with a torn ACL. Kelly is off to the NFL. So are Evan Engram, D.J. Jones and Fadol Brown.

Marquis Haynes is back to lead the defense, but the Rebels’ leading candidate for that role on the other side of the ball is harder to nail down. But playing a position where leadership is the natural expectation, the onus is on Patterson to morph into the new face of a program entering a season that will be anything but normal.

“It has to happen,” Ole Miss coach Hugh Freeze said. “And I think the great thing is I think his ceiling can be really high.”

With a release that Freeze called “one of the better I’ve seen coming out of high school” and an innate ability to avoid pressure that’s drawn comparisons to former Texas A&M Heisman Trophy winner Johnny Manziel, nobody’s questioning Patterson’s talent.

The former five-star prospect averaged more than 293 passing yards against Texas A&M, Vanderbilt and Mississippi State last season, leading Ole Miss back from a two-score deficit in the fourth quarter against the Aggies with two touchdown passes in a 29-28 win in his collegiate debut. Patterson threw twice as many touchdowns (6) as interceptions (3) and added 169 yards on the ground in those games.

“I think experience-wise, I learned a lot, getting out there in front of the crowds, getting the chemistry down with your teammates in a game situation,” Patterson said. “I think that will really benefit me going into this season.”

Freeze said he’s eager to get a closer look at his quarterback’s preparation in the film room after Patterson spent most of last season in line for a redshirt. Other external leadership qualities haven’t always come as easy to the normally soft-spoken Patterson, but teammates said they started to notice a difference in Patterson’s words and actions in the spring.

“Just his work ethic,” offensive lineman Javon Patterson said. “The way he carries himself around the locker room and the facility. He’s the first one in, last one out. Little things like that really show up to us.”

Said defensive tackle Breeland Speaks, “He is our guy. We put all our faith in Shea.”

Patterson’s first year taking over the reins of the offense won’t come without adversity and could have more added to it before it’s over. Ole Miss has self-imposed a bowl ban as part of the penalties stemming from the NCAA’s investigation into the program, and the school won’t have its hearing before the Committee on Infractions until the season is a few weeks old.

Then there’s the usual demands of an SEC schedule. Ole Miss opens the campaign against South Alabama and Tennessee-Martin before the slate beefs up considerably with a cross-country trek to Cal and back-to-back road trips to Alabama and Auburn that begin a string of six straight league games.

The Rebels didn’t handle it well at times last season, their first losing campaign during Freeze’s tenure. A 24-3 lead against Alabama evaporated in less than a quarter in a 48-43 loss, Vanderbilt responded to 10 quick points from the Rebels with 31 unanswered in a 38-17 rout for the Commodores, and Mississippi State blanked Ole Miss 28-0 in the final two quarters to turn a 27-20 halftime lead into a laugher.

The Rebels believe they have the unity to better handle whatever comes their way this fall starting with their quarterback.

“I’ve never been around a group of teammates and group of players, coaches and strength staff who’s put in as much work as we have in the spring and the summer,” Shea Patterson said. “The offense is really clicking right now. The defense is clicking. I have a good feeling about this season.”