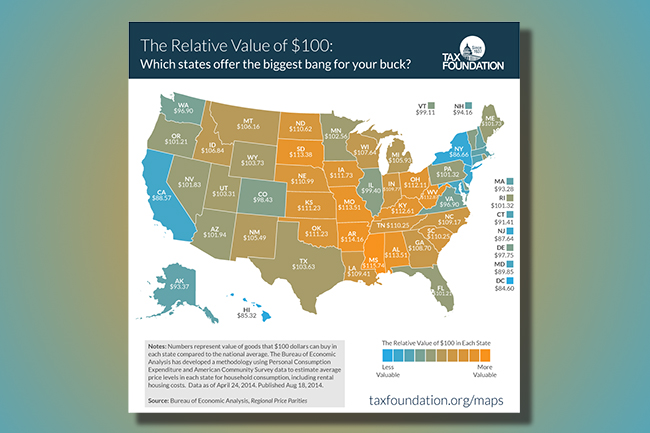 Mississippi may lead the nation in losing Millennials, but far more people born between 1981 and 2000 still call the state home.

Looking beyond the bonds of family and friends, the cost of living is one good reason. A Tax Foundation analysis found that the relative value of $100 in Mississippi is the highest in the country, worth $115.74 in spending power.

Gautier native Brittany Bright, 24, decided to take a job as an advertising account coordinator in her hometown after graduating from the University of Mississippi in 2016, even though she had job opportunities in other cities outside the state.

“The only other option that was seriously considered was Chicago. Although I would raise my child around family there, the apartment search was daunting,” Bright said. “I did not see where I could afford to live comfortably in Chicago and still have disposable income. I would have gotten paid more in Chicago, but because the cost of living is so much higher, I do not think the higher pay would have mattered much.”

But his desire to inspire positive change in his community through his business venture is a strong motivation for him to stay close his hometown of Ridgeland.

“My family (is important), but also the drive to instill change here. I want to make a change in the community, so I’m doing so the only way I know how,” Rollins said.

That same desire keeps DeSean Dyson, 33, in his hometown of Jackson. Dyson is the Head of School at The Redeemer School.

“My personality, passion and Christian conviction drive me to where the need is,” Dyson said. “With education, disrupting systematic poverty and injustice being some of my core beliefs, Mississippi provides me with the context I feel called to work in the most.”

Rep. Robert Foster, R-DeSoto, is a part of the Mississippi Future Caucus, a group of Millennial legislators in state House of Representatives. He has spent most of his life in Mississippi, and he is concerned that so many smart, ambitious Millennials find better opportunities elsewhere.

“I believe the last two generations, mine and the one following me, have been misled by our education system,” Foster said. “The reason I say that we have … everyone believing that they are a failure if they don’t have a college degree.

“You still gotta have skilled labor, and those workers don’t necessarily need a four-year college degree,” he said.

While Mississippi’s community college system trains some students for vocational jobs, Foster believes that kind of instruction should begin in high school, while not cutting off college prep coursework for those students interested in going to four-year colleges.

“Now they can go to junior college to further their skills, but why wait until they walk out of high school to start teaching them how to do something to make a living?” Foster said.

Despite the negatives, perceived and real, that may cause Millennials to leave their home state, other members of their generation are optimistic.

“The main reason I am still working and living here is because I feel that Mississippi is truly on the cusp of a break through, and I want to be a part of that,” said 26-year-old Jackson resident John Spann, who works as an education historian. “There are many other Millennials working in Mississippi who are striving to bring growth to the state and it is a pleasure to work with them.

“Mississippi is not perfect and there is still work to be done, but strides of progress have been made,” he continued. “Mississippi is home to me, it is where my family and friends are, and where I have found myself.”