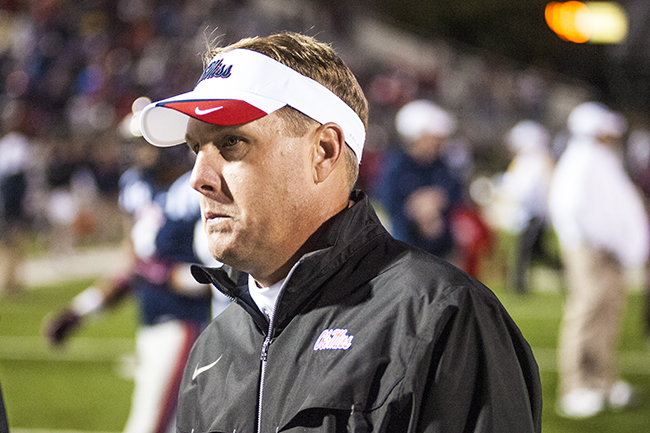 The man who Hugh Freeze replaced as the Ole Miss football coach was at least partially responsible for Freeze’s stunning downfall Thursday night.

It was a recently filed civil lawsuit from Houston Nutt — who coached Ole Miss from 2008 to ’11 — against the university that unearthed the phone records that eventually revealed Freeze’s school-issued cellphone had dialed an escort service on at least one occasion in 2016.

Freeze resigned on Thursday after university officials found that the coach engaged in a “pattern of personal misconduct” that was unacceptable. The 47-year-old — who was making more than $5 million per year — will receive no buyout, according to Ole Miss athletic director Ross Bjork.

Freeze’s phone records might have never been researched if Nutt hadn’t filed a lawsuit against the university earlier this month. The suit claims a breach of his severance agreement because of false statements he says school officials made to try and pin blame for the NCAA investigation on Nutt.

There are 21 allegations in the NCAA’s case against Ole Miss. Four of them occurred in relation to Nutt’s tenure while 17 happened under Freeze.

Ole Miss strongly defended Freeze in its latest response to the NCAA’s allegations, saying the coach emphasized NCAA rules compliance during his tenure. Now the school will go forward in its case without him.

In researching the civil suit, Nutt’s lawyers made a Freedom of Information filing asking for Freeze’s phone records for several days in January 2016. The aim — which is detailed in the suit — was to try and show that Ole Miss officials conspired to spread misinformation to media and form a “smear campaign” against Nutt.

It found much more.

In those records, which were obtained by The Associated Press and several other media outlets, was a one-minute call to a Detroit-based number. An internet search shows the number linked to a site that offers various escort services. Subsequent research by Ole Miss officials into Freeze’s phone records found more misconduct.

One of Nutt’s attorneys, Walter Morrison, said late Thursday night that Freeze’s attempt to pin blame for the NCAA investigation on Nutt backfired in a huge way.

“It’s sad the university did not deal with this in the manner of which they should have,” Morrison said. “And if they had dealt with Houston Nutt appropriately to begin with, he would not have been besmirched, he would have been treated appropriately and fairly, consistent with the severance agreement that all of us signed.

“And interestingly enough, Hugh Freeze would probably still have his job.”

Bjork said Freeze would have been fired if he hadn’t offered his resignation. He added that Freeze’s resignation is strictly because of his personal conduct and not because of the current NCAA investigation.

“In our analysis, we discovered a pattern of conduct that is not consistent with our expectations as the leader of our football program,” Bjork said. “As of (Wednesday), there appeared to be a concerning pattern.”

Co-offensive coordinator Matt Luke has been named the interim coach for the upcoming season. Freeze finished with a 39-25 record, including a 19-21 mark in the Southeastern Conference, over five seasons.

The Freeze era produced some huge highs for the Ole Miss program, including a Sugar Bowl win over Oklahoma State following the 2015 season. But the victories have been largely overshadowed by a long-running NCAA investigation that includes charges of academic, booster and recruiting misconduct.