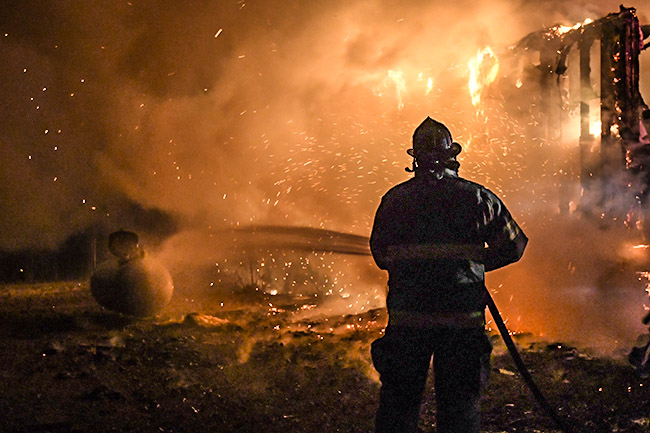 With more and more subdivisions and developments being built, Lafayette County is quickly becoming more suburban than just acres of undeveloped land with a few homes spread out. More homes can mean more potential house fires.

The Lafayette County Fire Department is asking the Board of Supervisors to give them the ability to keep up with the growth by providing nine full-time paid firefighters, to be in addition to the already staffed three firefighters that are based out of the Central Fire Station.

“Having nine would allow us to have three full-time firefighters on call at the station 24 hours a day,” said Lafayette County Fire Coordinator Wes Anderson who presented the fire department’s annual budget during a budget review meeting with the supervisors Wednesday.

The nine positions would cost about $434,000 and would increase the budget by about $200,000 that would require either a raise in millage or additional funds from the general budget.

The fire department currently collects 2 mills for fire services, which is about $215,000; however, that could increase as property values were reassessed this year. Other funds come from fire insurance rebates.

Much of the departments 100 or so volunteers are made up of aging volunteers, University of Mississippi students and off-duty Oxford Fire Department firefighters. Anderson estimated about 50 percent were active volunteers.

“Since January, we’ve responded to 212 calls,” he said. “We project by year end that number will increase to about 509 calls, which is a 17 percent increase from last year.”

Anderson said the department is not looking to have paid staffing in all 17 fire stations.

The requested budget without the additional paid employees is $945,000, which includes an estimated cost of $348,000 for a new fire truck at the future Station No. 17. The fiscal year runs Oct. 1 through Sept. 30.

Also presenting their budgets Wednesday was Lafayette County transit services with a $79,335 budget and Emergency Management Service presenting a $231,000 budget.

The supervisors are meeting with department heads this month to go over proposed budgets. Once County Administrator Lisa Carwyle receives the actual revenue from taxes proposed for next fiscal year, the supervisors will go over each budget again to see what the county can afford to pay for each department.

The supervisors will vote on the county budget in September.