Some old, and new, players will be key for Lafayette High volleyball in 2017 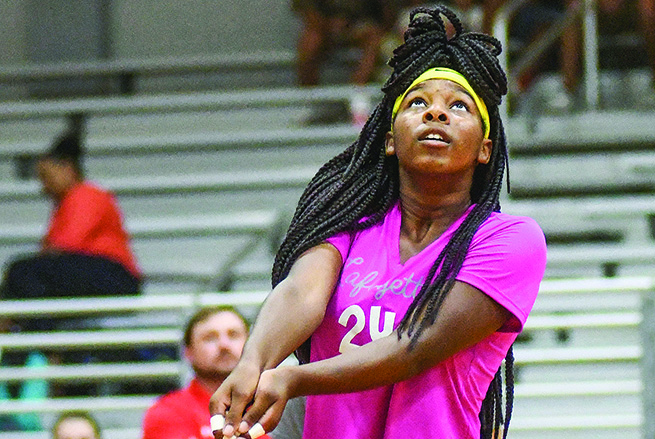 Being eliminated from the playoffs by the eventual state champions is one thing. Getting eliminated by your cross town rival is something else entirely. That is the motivation that is fueling this season’s edition of the Lafayette volleyball team.

Younger than last year yet still full of experience and bringing back old teammates is the makeup of the Commodore squad. More than half of the varsity roster is made up of juniors or younger. That has caused for a higher participation numbers during their voluntary summer workouts, including a trip to the University of Central Arkansas camp.

“We had a really good camp,” Lafayette head coach Clint Jordan said. “We competed against some high quality teams. Struggled at first, but made some marked improvements while we were there. Summer’s been good to us.”

The youth is also creating some first-time experience for players in certain spots. Jordan is countering that with a lot of fundamentals their first week of actual practice later this month.

“If we can just get those two things, our fundamentals and court awareness, in the the right places we can be really competitive really quickly.”

Senior Cylie Robertson and junior Mariah Holland and sophomore Juilianna Ingram lead the batch of returning players. Fellow seniors Rylie Courser, Savannah Baker and junior Sarah Rae Goolsby will be looked to man the outside portion of the court.

They are losing the production of Orianna Shaw along with former captain Kirkland Pruitt. Robertson is going to move into the libber slot, replacing the departed Kirkland Pruitt.
“(Robertson) is athletic and I think production-wise she’s going to be good for us,” Jordan said.

Back in the fold
After taking a year off to focus on basketball and track, Xhiir Burgess is rejoining the volleyball team in a big way. The junior is going to be asked to fill the big shoes left behind by Shaw, who was a defensive force of nature at the net for the Commodores last season.

“She understands the systems and my expectations,” Jordan said. “There’s been kind of a smooth transition for her to come back and compete with us. It’s nice to have her because she’s so competitive.”

The more things change…
Lafayette as a school is moving up to Class 5A for the first time and with that comes new competition and environments for many of the athletic teams. That is not so much the case for volleyball. They are remaining in Class II as well as the same region as a season before. That has eliminated the extras pressure of having to learn new opponents and tendencies as the season goes on.

“We still got that long travel to New Hope and Caledonia,” Jordan said laughing. “I still feel like the top end of 5A is the Lewisburgs, Lake Cormorants, Center Hills, Germantowns and honestly Caledonia. You have to play exceptionally well to compete with them. But you have to play near perfect to beat them.”

The Commodores begin the season on August 8 when they play Oxford.