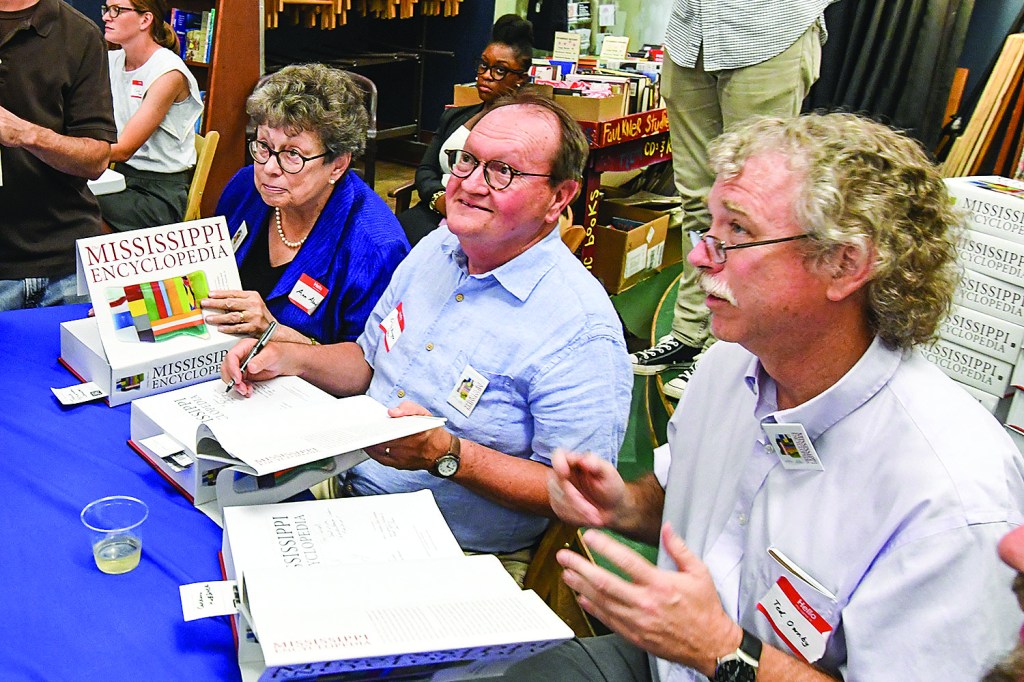 Ann Abadie, from left, Charles Wilson, and Ted Ownby sign copies of the Mississippi Encyclopedia at Off Square Books on Saturday, May 20, 2017. (Photo/Bruce Newman)

OXFORD (AP) — At 1,451 pages and nearly 9 pounds, “The Mississippi Encyclopedia” is something to behold.

“Foot injuries,” said Charles Reagan Wilson, a senior editor. “I see a lot of foot injuries from this book.”

In the early 2000s, there was a nationwide push to create state encyclopedias. Wilson and fellow senior editor Ted Ownby had recently finished work on “The New Encyclopedia of Southern Culture,” a 24-volume exploration of life below the Mason-Dixon line.

They weren’t excited about digging into another massive project, but Seetha Srinivasan, then-director of the University Press of Mississippi, made a solid case.

“Because we had this history, she thought we should do it,” Ownby said.

“There are a lot of blues musicians in this book and every governor and lots and lots of Civil War generals,” Ownby said. “The stories get us into not just an issue but they tell the arc of the person’s life.”

The encyclopedia opens with Gulfport native and basketball star Mahmoud Abdul-Rauf, who was born Chris Jackson. The last entry highlights the life of Zig Ziglar, who grew up poor in Yazoo City and became a motivational speaker known around the world.

“I think there is a lot of hopping around,” Ownby said. “It’s in A-to-Z format, so it’s not listed thematically. I think that’s part of the appeal.”

The Ku Klux Klan is covered not far from kudzu, otherwise known as “the plant that ate the South.”

Don’t look for a “kitchen sink” entry, but there probably should be one. The original contract with the University Press of Mississippi was for 650 pages, but the state’s history blew past that boundary.

Elvis Presley, William Faulkner, Eudora Welty, B.B. King and other Mississippi giants get the extra attention they deserve, while most entries come in at about 750 words.

“You have to prioritize when you are writing about people succinctly,” Wilson said. “Why is this person important to Mississippi? Why is he in ‘The Mississippi Encyclopedia?’”

From the beginning, the editors sought help in answering those questions by reaching out to more than two dozen topic editors.

Colleges and universities from throughout Mississippi provided ideas and scholarship. The project also attracted team members from as far away as England and Finland.

“Contributors came from 33 different states and something like 10 countries,” Ownby said, “and toward the end, we relied on a lot of graduate students.”

Topics include social and economic history, the press, fiction, folklife, politics and government, Native Americans, religion and sports, but that’s just a sampling. The encyclopedia goes on and on, and entries often delve into multiple topics. Ed Scott’s story is a prime example.

An African-American farmer and businessman, Scott built a successful catfish operation in the Delta, and he did it in the face of opposition from the Farmer’s Home Administration and white-owned businesses.

“It may seem to be about food, but his story includes so much more,” said John T. Edge, foodways topic editor. “It covers race relations, the government, agriculture, black entrepreneurship and food.”

One of Wilson’s favorite entries focuses on Red Barber, a Columbus native who used phrases like “a ball slicker than oiled okra” and “a smile as big as a slice of watermelon” when doing radio play-by-play for the Brooklyn Dodgers.

“It was announced that Jackie Robinson was going to be playing for the Dodgers,” Wilson said. “This was a moment of crisis for him. He was from the segregated South.”

Barber decided to stay with the team and covered Robinson’s career for six years before moving to the New York Yankees’ radio booth. His story involves race, sports, nonfiction and religion, since he became a writer and also a lay preacher in the Episcopal Church after retiring from the broadcast booth.

Not all are native Mississippians

The people featured weren’t always born in Mississippi nor did they always die in the state.

In fact, President Ronald Reagan was never a resident, but he made repeated visits during his career. As the first sentence of his entry says, “Mississippi’s political transformation from Democratic to Republican stronghold mirrored closely that of Ronald Reagan.”

Becca Walton, who contributed as an Ole Miss graduate student and later as assistant director of the Center for the Study of Southern Culture, enjoyed learning about another part-time Mississippian, Joan Trumpauer.

A white woman, Trumpauer grew up in Virginia and became a Freedom Rider. She enrolled at Tougaloo College and participated in a sit-in at Woolworth’s in Jackson. Fred Blackwell’s photographs from that day depict Trumpauer and fellow protesters surrounded by angry and abusive counter-protesters.

“She was here just for a period of time, but the work she did was significant for the state of Mississippi,” Walton said, “and she’s part of the iconic image that people think of when they think of Mississippi.”

A disciplined person could read the book from cover to cover, but team members suspect most will look up specific people, places and things or turn to random pages to see what they find.

“I have a friend who said she put it on a rotating book holder in her home,” Walton said. “Every time they walk by, they flip through the pages and find something new.”

Thanks to donations from benefactors, the book is priced at $70, which makes it accessible for school libraries, so students can learn about bobwhite quail, juke joints, Mary Holmes College, the Mississippi Picnic in Central Park, slug burgers, yellow fever and so much more.

“This will be a prompt for other storytellers, for other book writers,” Edge said. “They can read 800 words here and then go do a deep dive to find out more.”

There has been some pushback. Even with 1,451 pages and nearly 9 pounds of information, the editors still had to decide what to leave in and what to leave out. Some readers have complained of glaring omissions.

“They’ve said, ‘How can you do a Mississippi encyclopedia without this person?’” Wilson said.

It’s impossible to please everyone, but the team has a plan to answer some of the critics. An online version is expected by 2018, so new entries can be added as the state’s story continues to evolve.

“Really, it’s the beginning of a conversation,” Edge said.

And Ownby said he suspects Ole Miss graduate students will be working on expanding “The Mississippi Encyclopedia” for years to come.