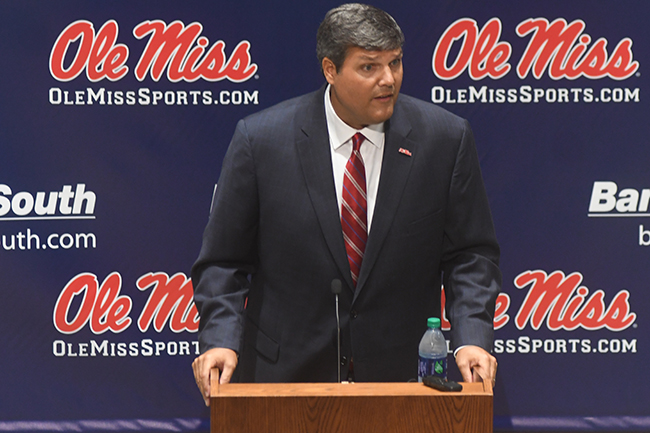 Matt Luke has been waiting for this his whole life.

Yet it was almost too surreal for him Monday.

Addressing the media for the first time since being named Ole Miss’ interim coach on Thursday, Luke had to pause at times. The promotion from offensive line coach and co-offensive coordinator gives Luke his first head coaching job at age 40 after four stints as an FBS assistant, including two at Ole Miss.

Luke thanked Ole Miss Chancellor Jeffrey Vitter and athletic director Ross Bjork for the opportunity as well as his wife, Ashley, and sons, Harrison and Cooper, for their patience over the years before elaborating on taking over a program in turmoil, stopping during and after sentences to fight back tears.

“I can truly tell y’all today that this is my dream job,” Luke said. “It’s a job I’ve been preparing my whole life for. I feel stronger now than ever that I’m the right man to run this program.”

Of course, Luke is taking over under unusual circumstances.

Luke said Bjork asked him if he’d be willing to serve as the interim for the upcoming season just hours before the school announced Thursday night that Hugh Freeze had resigned after five seasons after a review of Freeze’s university-issued cell phone records revealed multiple calls to numbers linked to escort services and massage parlors.

Luke said he talked to Freeze “briefly” when both coaches addressed the team after the announcement was made.

“He just told me to be myself,” Luke said.

For Luke, that’s about as Ole Miss as it gets.

Luke, who was Freeze’s offensive line coach throughout his tenure, played the position for the Rebels from 1995-98 before returning to Ole Miss to coach the offensive line and tight ends from 2002-05. His brother, Tom, played quarterback at Ole Miss from 1989-91, following in the footsteps of their father, Tommy, who was a defensive back for the Rebels in the 1960s.

His nephew, Cale, is carrying on the family tradition as a senior walk-on. Luke is from Gulfport, but his wife is from Oxford. His parents now live in Oxford as does Tom, who’s the Rebels’ assistant athletic director for player development.

Luke had a chance to leave after last season when South Carolina pursued him to be its offensive line coach, but he said the local ties for he and his family were too strong. Now he’ll make an additional $500,000 as the head coach this season on top of his $660,000 base salary, athletic director Ross Bjork said.

“I’ve been an Ole Miss Rebel all my life,” Luke said. “It’s all I can remember.”

Losing their coach less than two weeks before the start of fall camp isn’t the only dose of adversity Luke will try to help his players navigate. The Rebels aren’t eligible for a bowl this season as part of the penalties the school self-imposed stemming from the NCAA’s investigation, which has the program facing 15 Level I violations. There could be more sanctions coming with the school’s hearing before the Committee on Infractions on track to be held sometime during the season.

But players couldn’t think of many coaches better suited to help them move forward.

“He’s very passionate and he’s always going to give it his all,” offensive lineman Javon Patterson said. “He loses his voice almost every practice with us, so I know he’ll give it all to the team.”

Luke said he will hire an offensive line coach to fill out the retooled coaching staff. He hopes to have the position filled by the end of the week.

Meanwhile, first-year defensive coordinator Wesley McGriff will double as the associate head coach. That means doing whatever Luke needs him to do.

“It’s pretty much the same,” said McGriff, whose salary will stay at $1 million for the upcoming season. “Just a lot more support for Coach Luke. I’ve been coaching a long time and have been in a lot of meetings with a lot of different head coaches. Now it’s time for me to not only put together a great defense, but it’s time for me to give unconditional support to him on this journey. Let’s get Ole Miss football back where it belongs.”