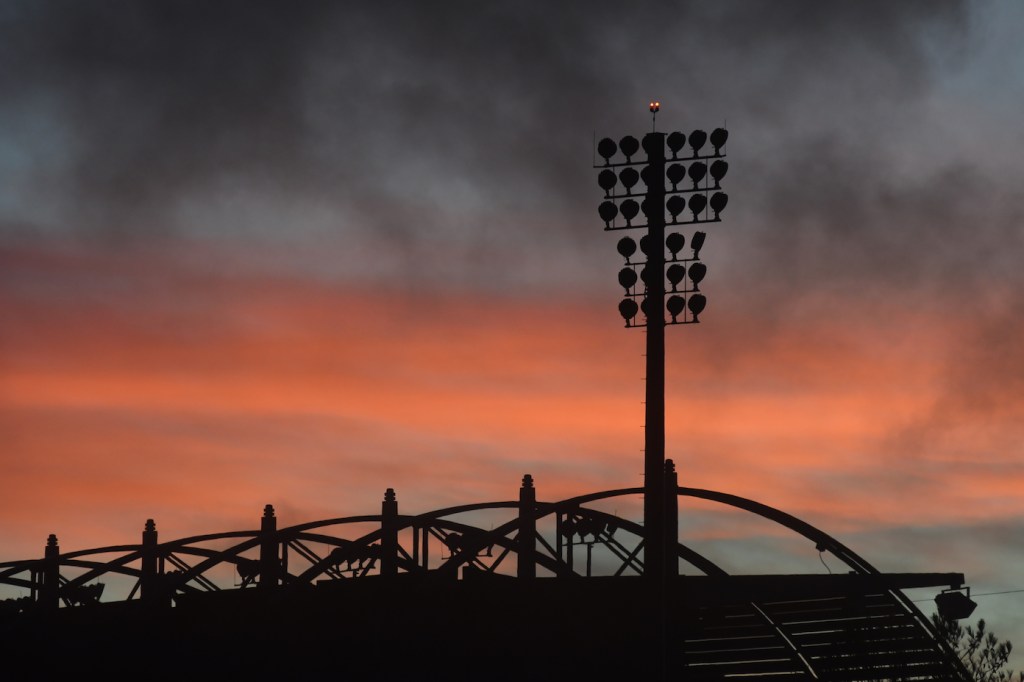 (This was originally published on the author’s personal blog.)

The college football industry has made me sick to my stomach for some years now. But that never stopped me from being a season ticket holder at my alma mater. And it didn’t stop me from shedding tears of joy and nostalgia anytime I saw a slow panned video of the Grove at Ole Miss.

I have watched a game on my phone on top of my amp while leading worship during a revival service. I have had season tickets, or shared a season ticket plan with someone, every year since fourth grade.

I watched players carted off the field on stretchers. I’ve watched their slim chance at a professional career grow slimmer with each injury. All while I sipped contraband bourbon from an eight-dollar cup and clapped.

I’ve joked, “Man, that cornerback is all over us. I hope he gets a little hurt—like enough to not come back in this game but go on to finish the season strong,” as if his body was expendable.

How often were those bodies I was being entertained by were black bodies—black bodies that weren’t acknowledged for their worth beyond physical prowess or even properly reimbursed for putting themselves on the line? And the whole time I was probably looking around the crowd, wondering how much more enlightened or less racist I was than everyone else (seriously, I do that in crowds because I’m a terrible person).

Today though, today I’ve drawn a line in the sand and stepped to the other side.

And it All Started With Hugh Freeze.

Hugh Freeze presented himself as a moral authority. He injected scripture into his coaching and the defense of his team. His downfall came when the university discovered “a pattern of personal misconduct.” A pattern that included calls to an escort service.

I don’t care if a public figure has sex. I don’t. I don’t even care if two consenting adults engage in transactional sex. That’s not my job. I’m not the moral police.

But when you cut your teeth on morality—when you put your flag in the sand and say, “I am above reproach, and this makes me superior,”—you had better be damn sure you’re above reproach. And worse, when you endear yourself to my family and friends and their impressionable children, you better walk a fine line.

And don’t you dare tie yourself to the school, the state and the very region I hold so close to my heart. No, sir, when you tie your trumped-up war games to the institution I cling to, you’re tying that to me. My family has poured two decades of our lives into Oxford and the University of Mississippi. My friends and I have worked too hard to make this a better place. We have no room for your morality plays here.

I don’t care if Hugh Freeze engages in a pattern of personal misconduct, as long as he doesn’t proclaim, with my name embroidered in powder blue and red on his chest, to be the moral authority.

And you may be thinking, “Well, JB, you seem to be climbing atop a very high horse right now,” let me say I’m not above reproach. I try to be, but I never claim to be. Let me offer a very tiny example. I cuss a lot in my personal life. But there isn’t a public version of me in which I try to hide that. You even saw a few (very tasteful) cuss words scattered throughout this particular essay (read: rant).

But This Isn’t All Hugh Freeze’s Fault.

I have had so many people text, call and tweet at me in the past 24 hours—people I have spent years watching college football with—to say they are hurting for the Freeze family and the assistant coaches and the players this affects. I am too. But at what point do we stop defending everyone involved and just say the system is broken.

Only five years ago we all realized we were prioritizing the winning record of the Nittany Lions over the lives and well-beings of young children who were raped at the altar of college football.

That sentence hurt to write. It seems like it carries too much weight, but it’s all true.

We said our Hail Marys and then we went right back to throwing Hail Marys with no regard to the broken systems that got us there.

Every year a college is given a slap on the wrist or asked to vacate previous wins (a meaningless sanction) because of athlete misconduct. Every year fans fill message boards with vitriol as they defend athletes from accusations of misconduct and rape. How many schools have seen this? Baylor, Missoula, Michigan State, Penn State, Vanderbilt, Minnesota, Florida State, Tennessee at Knoxville, and the list goes on and on. This isn’t a blanket statement indicting each of those players. Some of them are innocent and simply caught up in a terrible, terrible, terrible misunderstanding. But evidence of a very hot, very old fire, this much smoke provides.

We can’t give our students impunity to rage, couching it in war metaphors and biblical teachings, and expect them to practice restraint on a date. We can’t bend the rules for their sake and expect them to learn personal responsibility.

And we don’t do anything to stop this behavior. We hide it all because the industry is too big. We question the manhood and sexual orientation (as if they have anything to do with football) of those who speak out. They’re un-American. They can’t handle a real man’s sport.

We Have to Do Right By the Players.

Sure, they’re getting an education, but how many universities are funneling the majority of their athletes into degrees they’ll use as opposed to easy degree tracks where the administration doesn’t have to worry about players making the grade.

On top of all the controversy around players getting paid, many of them are. Many boosters are paying players in one way or another at every competitive football program in the country. But when they get caught, nothing happens to the (usually) white boosters, while the students are banned from the game and labeled money-hungry thugs.

The players are given a one in a million shot a payday, but they’re always one minor slip up from losing it all, and we are all the while tempting them. We have no skin in the game while the players shoulder all of the risk, physical and professional, for no compensation. And for some reason, we can all tune in on Saturday and not feel a little bit guilty.

So this season, I’m not letting any of my money go toward the perpetuation of this industry. When they decide to clean up and start paying players, I’ll reconsider. Until then I’ll spend my Saturdays hanging out with my new kid. Maybe I’ll be happier.

I’m not mad. I’m not disappointed. Being so would be akin to being shocked by a teenage boy for sneaking a cigarette. It’s been happening for a long time.

I’m just done. Done being a part of the problem.

And I’m not trying to convince you to quit either. I’m so uninterested in pushing my beliefs on others. This is where and why I stand. I hope at the least you find it compelling and at the most a little convicting.

You want to play football? Great. Quit calling it war, quit making it about morality, and pay the young men.

JB Clark is a self-proclaimed “weirdo, husband, new dad, storyteller, and writer—working out of the attic of a marketing firm by day and out of a shed in my backyard by night.” He graduated from the University of Mississippi in 2010.