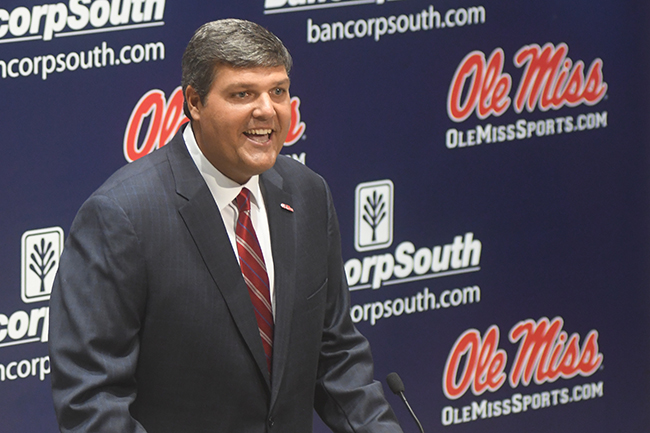 It was Christmas in July for Matt Luke.

Ole Miss’ new head football coach strolled through the double doors of the team room inside the Manning Center on Monday with a smile that stretched from ear to ear. He made a beeline for the podium in the center of the room and would’ve ran there if it made any sense for a man in a suit needing to cover about 10 steps to do so.

His eyes widened. His pride beamed. He was ready to talk about finally getting the only gift he’s ever wanted in his coaching career.

His first public comments since taking over for Hugh Freeze, who abruptly resigned Thursday after school administrators discovered phone calls Freeze made to numbers linked to escort services, were a blend of passion and emotion. He clutched the podium as he reminisced about growing up “an Ole Miss Rebel” — the No. 35 helmet of his father, Tommy, a defensive back for Ole Miss in the 1960s, hanging in his childhood home, making the five-hour drive from Gulfport to Oxford to watch his older brother, Tom, play quarterback for the Rebels, and wearing an Ole Miss jersey in the Grove on most of those trips.

Luke also played for the Rebels, a center on Tommy Tuberville’s teams from 1995-98. He’s spent 14 years of his life playing or coaching at Ole Miss, and now his nephew, Cale, is carrying on the family legacy as a senior walk-on. If anybody’s going to bleed red and blue from a cut, it’s Luke.

“I feel like it’s something I’ve been preparing my whole life for,” Luke said.

The only time his smile broke was when he tried to keep emotions from doing the same.

Luke heaped praise on the players he’s inheriting, a group he said has “never wavered” in the face of adversity that also includes a bowl ban for this season as part of the NCAA’s investigation into the program. He even had a message for a hurting fan base, looking up at the main camera in the room, but he took a few moments to choke back tears before he got through it all.

“I cannot wait to walk down that tunnel Sept. 2 and lock the Vaught together,” Luke finished.

Luke won the press conference and did so rather easily. Now he’ll have to win games as he auditions to keep his dream job permanently, which will be significantly tougher to do.

Luke is inheriting one of the Southeastern Conference’s more talented receiving corps along with one of the league’s top young quarterbacks in Shea Patterson, but the Rebels will need more from a running game that finished 12th in the SEC a season ago. It may not matter if a defense that was among the nation’s worst in several categories last season doesn’t make significant improvements under first-year coordinator Wesley McGriff, particularly at the second and third levels.

Ole Miss opens with two games it should win, but the Rebels can’t afford to look past South Alabama in their season opener (remember Mississippi State last year?). Things get tougher after that with a three-game road swing starting with a California team that’s a bit of a mystery with first-year coach Justin Wilcox and ending with trips to Alabama and Auburn, the favorites in the SEC West if you’re going by the media’s preseason picks.

The Rebels could weather that. There’s also the possibility losses pile up early in the season and create more hard times for a team that’s already gone through plenty.

“The motivation is each other,” Luke said. “When you’re working this hard, doing all these things together and go through all this adversity together, it brings a team closer. I think our kids will be mentally tougher having gone through all of this.”

If Luke is able to win and keep a wobbly Ole Miss train on the tracks, he’ll likely have some suitors even if one of them isn’t Ole Miss. But maybe Ole Miss keeps him around, particularly if it’s hit with a multi-year bowl ban that would shrink the pool of realistic outside candidates.

“There’s no criteria like that that we put on anything,” Bjork said. “To me, what’s best for the program? That’s how everything will be evaluated as we move forward for this season.”

Luke has his chance to prove he’s best person for the job beyond this season. Whatever happens, it won’t be for a lack of trying on his part.

“These kids know my heart. They know my passion,” Luke said. “I’m excited for the challenge.”

It’s the only way Luke knows how to tackle it.