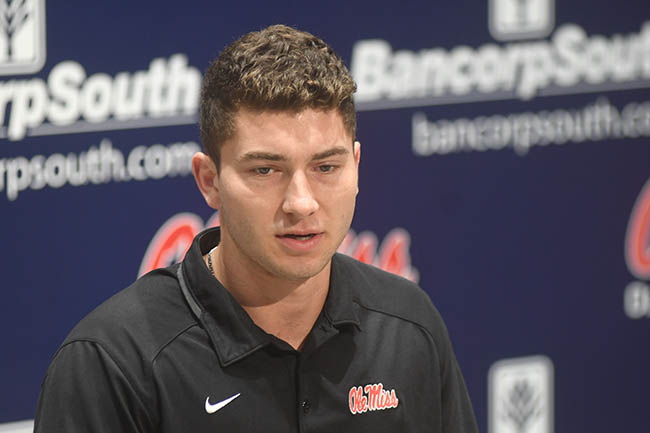 Shea Patterson has a soft spot for Hugh Freeze, which has made the last five days hard for Ole Miss’ young quarterback.

Like many head coaches around the country, Freeze took the lead for Ole Miss on Patterson’s much ballyhooed recruitment. The former five-star prospect had virtually every school in the country after him, but Patterson has maintained that, in addition to his older brother, Sean Jr., being on the Rebels’ staff, the core values and belief system that Freeze seemingly embodied as a person was a big reason why he signed with Ole Miss in February 2016.

But that picture of his former coach crumbled last week when Freeze abruptly resigned after a search into his university-issued cell phone records revealed calls placed to numbers linked to escort services. Speaking publicly about Freeze’s departure for the first time this week, all Patterson could do was offer support for him former coach.

“Right now, I’m just kind of praying for Coach Freeze,” Patterson said. “Me, the players and the coaches, we have no influence on what happened.”

Patterson said last month during Southeastern Conference Media Days that Freeze was the “main reason” he hung around after Ole Miss self-imposed numerous sanctions in February related to the NCAA’s investigation into the football program, including a bowl ban for the upcoming season.

Patterson is still processing it all, but he brushed off the notion of transferring when asked if he had thought about it with Freeze out of the picture.

“It’s just all so much right now,” Patterson said. “I love this university. I love my teammates. With camp starting Aug. 2, all I want to do is go out there and play with the brothers that I love and the game I love.”

Freeze’s sudden ouster is the latest twist in a young career for Patterson that hasn’t gone exactly as he planned. Neither the coach nor the offensive coordinator he was recruited by — Dan Werner was fired in December and replaced by Phil Longo — are still around, and the redshirt he was in line for last season was burned after nine games when Chad Kelly went down with a career-ending knee injury.

There could be more coming.

Ole Miss, which is facing 21 charges of rules violations with 15 of them being Level I allegations, will have its hearing with the NCAA’s Committee on Infractions sometime during the season when college sports’ governing body will either accept the penalties Ole Miss has already self-imposed or levy additional sanctions. A multi-year bowl ban, if it’s added, could bring a transfer back into play for Patterson and other underclassmen.

For now, Patterson is doing what he can to be a leading force in the face of Ole Miss’ adversity. Interim coach Matt Luke said Patterson was one of the first players that approached him after Thursday’s news came down.

It will be a welcomed sense of normalcy for the new face of Ole Miss’ program.

“Two head coaches, two coordinators and the redshirt thing was obviously not ideal, but I think as a team and as a coaching staff, we’re ready to run for it,” Patterson said. “With camp being right there and Sept. 2 (being the first game), with the all the outside stuff that’s going on, we’re all just ready to play.”