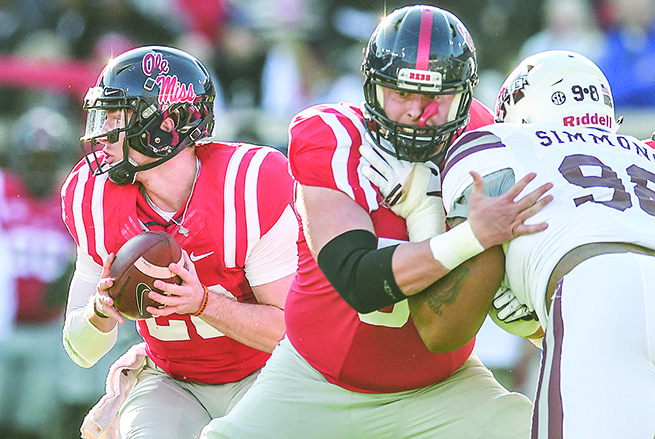 EDITOR’S NOTE: This is the sixth of a 10-part series breaking down each position on Ole Miss’ football team entering fall camp. A different position will be featured each day leading up to the Rebels’ first day of practice on Aug. 2.

If recognition is any indication, expectations are rising for Ole Miss’ offensive line.

Center Sean Rawlings has been named to the Rimington Award watch list while Javon Patterson and Greg Little landed on the media’s preseason All-Southeastern Conference team. Jordan Sims and Alex Givens are also returning, giving the Rebels all five starters up front back from last season.

Getting through the grind of an SEC season without any injuries in the trenches is a challenge if not unrealistic, but a combination of talent and depth built in recruiting in recent years has the Rebels believing a line that’s been a question mark in the past can turn into one of the best units in the SEC with Hugh Freeze, in his last public appearance as Ole Miss’ coach at SEC Media Days earlier this month, saying the Rebels have a chance “to have one of the better offensive lines in the country really.”

The group has combined for more than 40 starts. Rawlings, who began his career at tackle before settling in at his more natural position, is set to begin his second season as a full-time starter along with Patterson and Sims at left and right guard, respectively. Little, the nation’s top-ranked offensive lineman in the 2016 recruiting cycle, is entrenched as the starter at left tackle after starting five games as a freshman opposite Givens, a former four-star recruit who got the same number of starts at right tackle last season.

The depth starts with Taylor, the only senior among the top six options. The former four-star prospect is listed as a co-starter with Givens on Ole Miss’ preseason depth chart but could also play inside if needed after spending his first two seasons with the Rebels at guard.

A pair of former four-star recruits will back up Little and Patterson in redshirt freshmen Royce Newman and Jack DeFoor, respectively. Behind Rawlings is former Lafayette High standout Eli Johnson while senior Daronte Boudlin could spell Sims at times.

Ole Miss signed just one offensive lineman in its most recent recruiting class, St. Aloysius product Ben Brown. Brown projects as a tackle in college but will likely redshirt barring any significant injuries.

That leaves the Rebels without an offensive line coach for now, but Luke said he’d like to make a hire there by the end of the week to round out Ole Miss’ on-field staff. Patterson said the group is looking for someone ready to hit the ground running with fall camp set to begin Wednesday.

“Just somebody that will give us their all,” Patterson said. “As the offensive line coach, you’ve got to be with it. We’re the big uglies, and we’re ready to get after it. We’re the heart of the offense.”