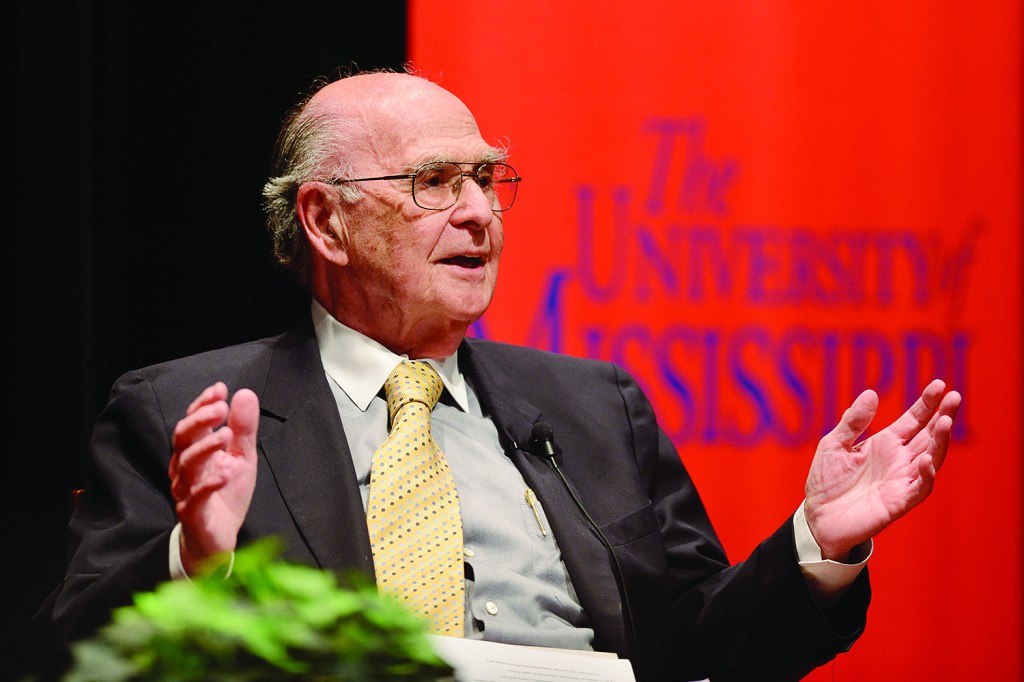 Harold Burson speaks during a panel discussion at UM in 2012. The Ole Miss alumnus and PR industry legend was inducted July 21 into the Southern Public Relations Hall of Fame. (Photo/Ole Miss Media Relations)

Harold Burson, a University of Mississippi alumnus known as the “Father of Public Relations,” has been inducted into the Southern Public Relations Hall of Fame in recognition of his decades as a giant figure in the industry he helped invent.

Burson, a 1940 Ole Miss graduate who has been described by PRWeek as the 20th century’s “most influential PR figure,” founded the powerhouse public relations firm Burson-Marsteller with Bill Marsteller in 1953. The firm created the concept of total communication strategies, which became the industry standard for decades.

Will Norton, dean of UM’s Meek School of Journalism and New Media, was among those who wrote a letter supporting Burson ‘s nomination to the Hall of Fame. Norton notes Burson has had a long and exceptional career and brought honor to the profession. He’s also made enormous contributions to the success of the Ole Miss journalism school.

“We have worked with Harold to initiate the integrated marketing communications degree program at Ole Miss that now attracts nearly 1,100 majors to the Meek School,” Norton said. “His sage advice in developing the curriculum and his interaction with faculty and students have been crucial for the program’s gaining recognition from the Accrediting Council on Education in Journalism and Mass Communications.”

“Without the guidance of Harold Burson, the Meek School would not be what it is.”

A Memphis native, Burson was an exceptional student, so much so that he entered Ole Miss at age 15. When he was 19, he served as a combat engineer in the U.S. Army, and in 1945, he worked as a reporter for the American Forces Network and was assigned to cover the Nuremberg trials after World War II.

After leaving the military, he used a connection he had forged with an engineering firm, which became the first client of his new PR company. Later, Burson-Marsteller was born.

The PR business grew from there and for many years, Burston-Marsteller was one of only two major PR firms in the world. In 1969, Burson’s firm was making about $4.4 million a year, according to PRWeek, but by the early 1980s, revenue was about $64 million, and Burson was head of a firm with 2,500 employees in 50 offices worldwide.

His firm handled several major accounts. For example, it helped Johnson & Johnson with its response to the deaths of eight people who had taken Tylenol in 1982. The company was not faulted, but it assumed responsibility and took the product off the market and halted advertising.

Representatives showed complete transparency and openness and made themselves available at all times to answer questions. The response to the Johnson & Johnson case led to Burson being credited with creating the template for crisis management.

The British government called on Burson-Marsteller ‘s help during an epidemic of mad cow disease. He also counseled Union Carbide, the Three Mile Island nuclear plant after a famous meltdown in 1979 and BP after its Torrey Canyon oil tanker sank.

Inductees must have 25 years of professional experience that brings honor to the profession and show strong contributions to their organization, city, state or region, among other criteria.

Burson’s son, Mark, is an adjunct instructor in integrated marketing communication at UM. He accepted the recognition on behalf of his father, who could not attend the July 21 ceremony.

“He’s counseled royalty and shaped the image of many top global brands, but he’s always remained involved and partnered with the university on so many projects,” Fiene said. “His influence on the profession isn’t just what he has accomplished, but on the lives he has touched and the students he has mentored.

“The seeds he has sown will live for generations to come.”

Rick Dean and Kristie Aylett, agency principals with The KARD Group, a PR and marketing firm based in Mississippi, also were among those writing letters in support of Burson’s nomination.

“Kristie and I have studied and respected Harold’s contributions to our industry since we were students and, as professionals, we continue to use things learned from him,” Dean said. “To have played a role in Harold’s well-deserved nomination and induction into the Hall of Fame was our honor.”