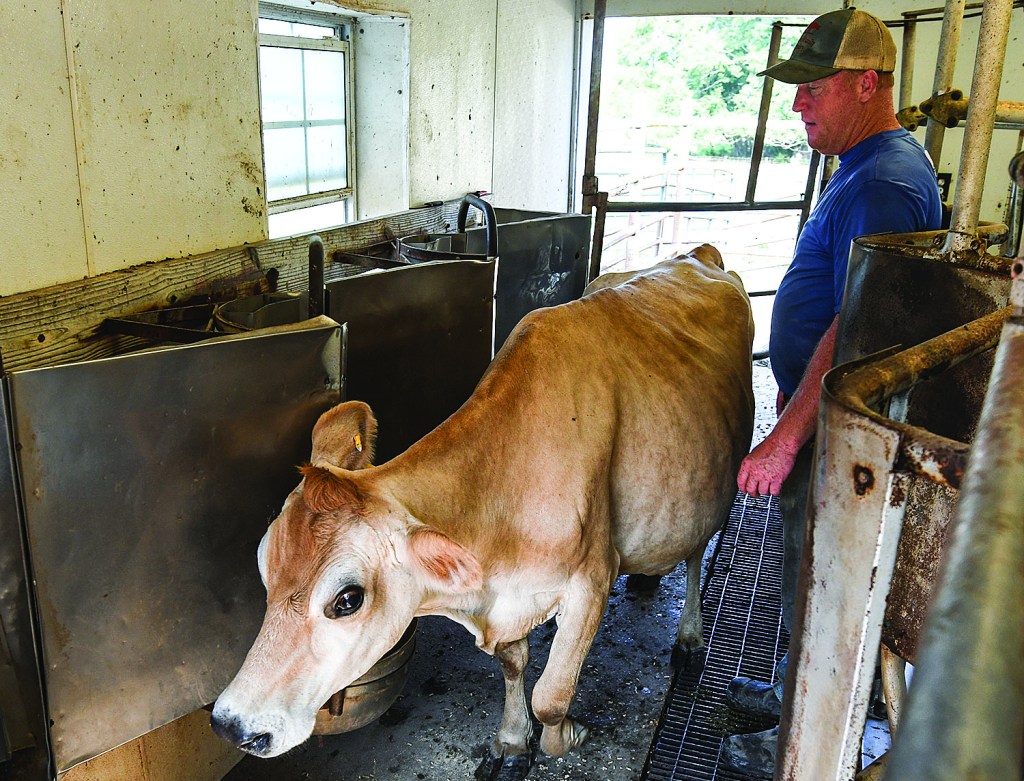 When Billy Ray Brown describes the products that come out of his dairy farm, he points out two areas in particular that set them apart.

First and foremost, his milk carries a unique and unmistakable quality of flavor that his customers can’t find anywhere else.

Second, however, is that in a world in which we’ve grown increasingly distant from the agricultural process, farms like his offer customers a closer, more personal connection to where their products come from.

As you learn more and more about the Brown Family Dairy, you realize that the emphasis on close personal connections extends far beyond the relationship with customers, into the tight-knit family operation at its core and even into the treatment of its cows.

“My wife’s helped me the whole time,” Billy Ray said. “I couldn’t do it without her. It’s truly a family, and this is something I want to do as a family. Hopefully, I can pass it on to my children if they’re interested. That’s always been my goal.”

His wife and children primarily help with the bottling, though his son also helps out with some of the chores around the farm.

After 13 years as a high school coach and two years of helping with the dairy part-time, Shane Brown, Billy Ray’s brother, came on in July 2016 to oversee deliveries and sales, though he also steps in to milk the cows when Billy Ray needs a hand.

Starting modestly in 2009 with only four cows, the Brown Family Dairy currently has anywhere between 30 and 40 cows in rotation at a given time.

Billy Ray said that determining how many cows to keep at a given time so that they meet consumer demand without overproducing is an ongoing balancing act. During the summer, the cows won’t milk as much, but the demand is high, while during the winter, the opposite is typically true.

In addition to the number of dairy cows kept on the farm, Billy Ray also raises beef cattle and hogs, which he says help to break up the routine to keep things interesting.

“We try to diversify the farm as much as we can,” Billy Ray said.

At the end of the day, however, the day-to-day connection with the dairy cows, as opposed to the relatively self-tending beef cattle, helps to forge a deeper emotional connection between the family and the cows.

“These dairy cows, you know every one of them by name,” Billy Ray said. “You spend a whole lot of time with them, and you get attached to them. They’re kind of like part of the family.”

As their output has grown over the years, Brown Family Dairy products have found their way onto shelves all across North Mississippi.

In Oxford, customers can find their milk at local businesses like Larson’s Cash Saver, Lindsey’s Chevron, Chicory Market, Skymart, and even in their orders at Cups Espresso Café.

Outside of Oxford, their products can be found at various businesses in Pontotoc, Tupelo, Saltillo, Olive Branch, Southaven, Hernando, Senatobia, Batesville, Clarksdale, Water Valley, and Bruce.

To Shane, however, it’s still not enough to satisfy his goals.

Shane said that his ultimate goal for the dairy is to establish a presence in every county in North Mississippi, something he thinks is certainly possible simply on the strength of the product itself.

“The product sells itself,” Shane said. “It’s the easiest thing I’ve ever tried to sell in my life.”

Moving forward, the one big question mark that stands in front of the Brown Family Dairy, according to Billy Ray, is the land market.

As Billy Ray sat and thought about the drastic changes in land development he has seen in Oxford and Lafayette County since he was growing up, he couldn’t help but wonder what the next ten years would hold.

“That’s going to be what either makes us or breaks us, I think,” Billy Ray said.

As for right now, however, the Brown Family Dairy can continue to do what it does best — producing a high-quality product in a family-centric environment for customers all across North Mississippi.