Joe Rogers: The brick wall in my family tree

That handsome, bearded fellow you see there (note the uncanny resemblance?) is the reason I am a Mississippian.

That’s Great-great-grandpa Joe W. Rogers, who at some point pre-Civil War had the surpassing wisdom to leave Wilcox County, Ala., behind and strike out west. Otherwise, I shudder to think what might have been.

I came across Joe W. during a four-generation leap into the past made easy by one of those online genealogy sites, Ancestry.com. It was a relatively easy payoff basically accomplished on the strength of somebody else’s research.

It was also, as it turned out, a brick wall. Try though I might, I’ve been unable to get past Joe W. in my Rogers lineage.

I’m reasonably certain he did not spring forth, Adam-like, from the Alabama earth. But it seems not to have occurred to him to leave any clues as to his parentage.

Not long ago none of this mattered to me. In fact, I used to scoff at folks whose delving into family history seemed always to connect them with Charlemagne or William the Conqueror, with some nifty coat of arms to display. 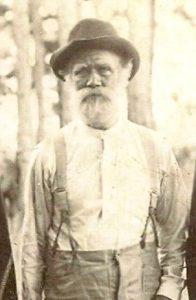 But for travel bucket list purposes, I’ve become a convert. And it is now my goal to ascertain what precise spot my Old Country Rogers antecedent came from, and to visit such place with attendant celebration.

Toward that end I have taken a DNA test via Ancestry.com. It pegged my background as 55 percent Western European, 33 percent Irish, 6 percent Scandinavian and 2 percent each Iberian Peninsula, Finland/Northern Russia and Great Britain. A little vaguer than I had in mind.

Everything else: zippo. So much for that Native American ancestor Mama’s side was said to have provided.

Speaking of Mama’s side: I’ve done some Fitzgerald research, too. And though I was able to go back a generation deeper than the Rogers side, I still haven’t gotten any of them back to their old country, which I assume to be Ireland.

As for the assorted other branches and twigs on my extended tree, the Campbells, Dukes, Vices and so on: Sorry. I can only cope with so much failure.

The DNA test did provide 37 shared ancestor hints, none of which told me anything of unknown Rogers note, and a potential for 2,046 4th cousins or closer. Shoot, I have first cousins I wouldn’t know if they walked in my front door. I haven’t tackled that expanded list yet.

But have I given up? Have I despaired?

No, I have taken yet another DNA test, limited to the male Y chromosome.

This one promises that it can “help identify surname lines, living relatives whose Y chromosome is similar to yours, and ancient migration routes your paternal ancestors may have taken.”

With luck, I’ll use the info to cross paths with somebody who has the key to my ancestral past.

“I recommend you do like I do,” he said, “make up my ancestry as I go along and visit any damn place I want. ‘Hey Cuz! Wanna have a beer?’”

I have to admit, it would save a lot of time.