Allegations are made against animal shelter 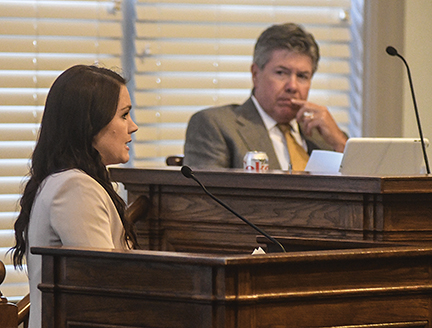 Katie Muldoon speaks about the Oxford Lafayette Humane Society during a Board of Aldermen meeting at City Hall in Oxford, Miss. on Tuesday, August 1, 2017.

Too many animals are being euthanized at the Oxford Lafayette Humane Society was one of the several allegations made against the shelter by former board members and employees at the Oxford Board of Aldermen meeting Tuesday.

Former OLHS board member Katie Muldoon presented an eight-page document and spoke for about 10 minutes about concerns she and others have regarding what they claim are unethical practices by the executive board and board president, Cyd Dunlap, who has been president of OLHS board for 17 years.

Two weeks ago, six of nine full-time employees resigned from the shelter, including the animal control officer, Alyce Hale and executive director, Jenn Petermann. Muldoon said those who resigned disagreed with the president’s philosophy of excessive euthanasia to keep the shelter at half capacity and alleged constant hostility from the executive board members.

“They refused to facilitate or participate in the president’s plan to reduce the shelter population by half,” Muldoon told the aldermen. “Which was predicted to occur after the executive director’s resignation, and in fact did occur within 48 hours of the resignations.”

Muldoon said Petermann had been reprimanded for having animals transported to other shelters, mainly up North where there are fewer strays, and that there is $6,000 in a transport fund that isn’t being used.

The document presented by Muldoon also claimed a lack of legitimate elections of board members and the board failing to follow the OLHS bylaws.

“In the past 10 years — possibly further back — there has never been an election,” Muldoon said. “Elections have only been used to approve of an already-chosen replacement for any vacant office on the executive board.”

Some of the board members contacted the Secretary of State’s Charities Division with their complaints and allegations against OLHS. According to the document presented by Muldoon on Tuesday, the SOS’s investigation found that two board members were removed in April without cause and the board was not in compliance with its own by-laws. There were no findings of misuse of funds found during the investigation.

• Little-to-no input by regular board members on how a $600,000 donation left in a will should be spent. The executive board said the donation was meant to go toward creating a spay and neuter facility at the shelter, but several former board members felt clinic was unnecessary as there is already a low-cost spay and neuter program in place.

• The public not being allowed at board meetings.

No one spoke in response to Muldoon’s allegations during the meeting; however, the City Hall courtroom was filled to standing-room-only by those who supported Muldoon’s claims and members of the current OLHS board and staff.

Mayor Robyn Tannehill explained the aldermen had limited authority over of the shelter; however, the city contracts with OLHS to provide animal control services and pays more than $125,000 annually for those services.

“We are in the middle of our budgeting process so now is the time to discuss these issues,” she said.

Tannehill said the city expects the shelter to follow its bylaws, which need to be updated, and said she will suggest that an alderman and a Lafayette County supervisor be appointed to sit on the board as a requirement to continue paying the shelter for animal control services.

Alderman John Morgan said he wanted to “get to the bottom” of the allegations and learn more before the OLHS board presented its budget to the aldermen.

After the meeting, current board member Janet McCarty said she agrees some changes need to be made, but the staff walking away from the shelter two weeks ago only hurt the animals.

“They claim to care about the animals but they just walked away,” she said. “I had to go down there and help work because they left the shelter in such disarray. If you want to change, you have to stay and be willing to work toward it, not just walk away.”