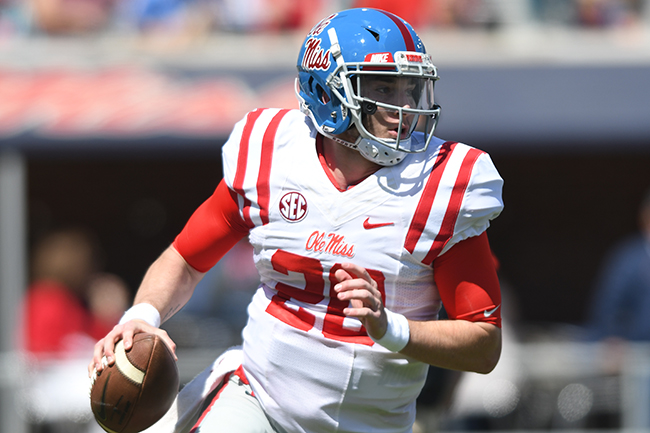 EDITOR’S NOTE: This is the tenth of a 10-part series breaking down each position on Ole Miss’ football team entering fall camp. A different position will be featured each day leading up to the Rebels’ first day of practice today.

The start of Shea Patterson’s collegiate career has been anything but conventional.

In the 19 months since enrolling at Ole Miss amid much fanfare, the Rebels’ quarterback has seen the coach and the offensive coordinator he committed to leave. The original plan to spend his first season on campus watching and learning from Chad Kelly was scratched late last season when Kelly’s torn ACL forced Patterson into action, burning a year of his eligibility for the final three games.

Patterson admitted in the days after Hugh Freeze’s abrupt resignation last month stemming from the discovery of Freeze using a school-issued phone to make calls to numbers linked to escort services that it was a lot to digest. But the former five-star prospect is sticking around to give Ole Miss stability at the most important position on the field.

“I love this university. I love my teammates,” Patterson said. “With camp starting (Thursday), all I want to do is go out there and play with the brothers that I love and the game I love.”

Patterson joins Alabama’s Jalen Hurts, Georgia’s Jacob Eason and South Carolina’s Jake Bentley in what could be a strong sophomore quarterback class in the Southeastern Conference with a skill set that’s hard to teach.

A quick, compact release and accuracy are strengths of Patterson’s game. With a limited playbook to work with last season, Patterson still threw for 293 yards a game in his three starts with twice as many touchdowns (6) as interceptions (3), though he’ll look to improve on a completion percentage of 54.5.

It’s not just Patterson’s arm that’s capable of making plays. The 6-foot-2, 203-pounder showed an innate ability to escape pressure in the pocket, often turning broken plays into something positive with 169 rushing yards a season ago.

Backing up Patterson will be Jordan Ta’amu, who has experience beyond high school as a junior college transfer. Another signal caller with dual threats, Ta’amu, who accounted for 3,342 total yards and 39 touchdowns last season at New Mexico Military Institute, enrolled for spring practices and came along quickly in first-year coordinator Phil Longo’s offense to the point that coaches felt comfortable enough to move Jason Pellerin, last season’s backup quarterback, to tight end.

Running the second-team offense, Ta’amu went 6-for-11 for 188 yards while throwing one touchdown and running for another in the Rebels’ spring game.

Pellerin, who was used mainly as a runner in short-yardage and goal-line situations last season, could possibly return to his old position to provide depth if needed with true freshman Alex Faniel being the only other scholarship quarterback on the roster. A consensus three-star prospect, Faniel accounted for 1,787 yards of offense during his senior season at Glen Allen High (Virginia) despite missing part of it with an injury, but he’ll likely take a redshirt this fall barring any significant injuries to the more experienced quarterbacks in front of him.

Walk-ons Graham Lindman and Grant Restmeyer are the only other quarterbacks listed on the roster. Restmeyer redshirted last season while Lindman, a junior, joined the team in the spring.