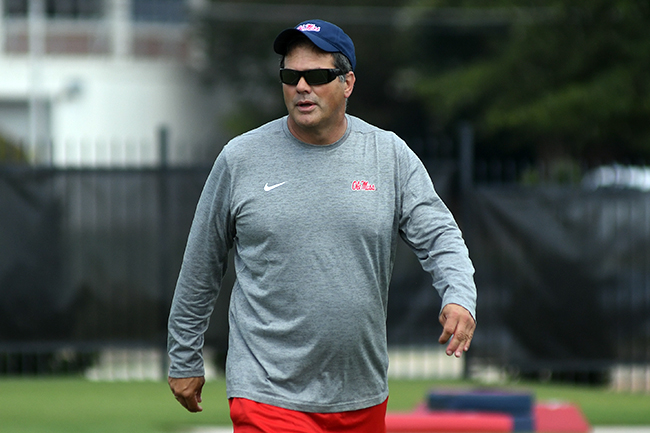 Jack Bicknell Jr. was eating dinner at a Boston restaurant when the news of Hugh Freeze’s resignation at Ole Miss and Matt Luke’s subsequent promotion to interim coach came across the ticker.

He was literally chomping at the bit.

Bicknell, a coaching veteran with more than 30 years of experience at the collegiate and NFL levels, was out of work after a two-year stint with the Miami Dolphins as an assistant offensive line coach. He interviewed with the New York Jets, San Francisco 49ers and the Canadian Football League’s Toronto Argonauts for their line positions but didn’t land any of them.

Perhaps it was for the best. Bicknell spent the down time living in New Hampshire taking care of his ailing father, former Boston College coach Jack Bicknell, whom Bicknell says is “better now,” but a three-decade coaching itch is hard not to scratch.

Luke’s promotion from offensive line coach to head coach created an opening on Ole Miss’ staff two weeks before training camp began, and Bicknell was proactive in showing how much he wanted the job.

“When I first heard about it, I didn’t realize they were going to elevate an o-line coach, but then when I heard he was an offensive line coach, then I got on the phone,” Bicknell said.

Bicknell researched the coaches already on staff at Ole Miss to see if he had any connections. He found one in receivers coach and Mississippi native Jacob Peeler, whom Bicknell had recruited and coached when he was the head coach at Louisiana Tech but had lost contact with over the years.

Bicknell placed that phone call to Peeler seeking a recommendation.

“He recommended me, and one thing led to another,” Bicknell says.

Luke eventually got in touch with Bicknell and invited him to town for an interview. Bicknell was hired as the Rebels’ offensive line coach last Friday and hasn’t been back north since — and he’s not sure when he’ll get back either with Ole Miss in the midst of training camp with the Sept. 2 opener against South Alabama four weeks away.

His first week on the job has been a blur.

“Scrambling,” says Bicknell, whose wife, Helen, will make the move to Oxford later this month. “Don’t have any clothes because I came down and interviewed, got the job and stayed of course because what’s the sense in going back? You’ve got to figure out where everything is, who everybody is and then meanwhile learn an offense in about four days. It’s been kind of a whirlwind deal, but I’m so grateful. I’m so fired up.”

He’s not the only one.

Luke said he was fortunate to have a coach with Bicknell’s credentials still on the market so late in the summer. Bicknell’s eight-year stint as the head coach at Louisiana Tech included Western Athletic Conference Coach of the Year honors in 2001 before he began his NFL coaching career in 2009 with the New York Giants, who had another familiar connection that helped sell Luke on Bicknell.

Bicknell also had brief stints as the offensive line coach for the Kansas City Chiefs and the Pittsburgh Steelers.

“I have three guys on my staff with head coaching experience in Coach (Phil) Longo, Coach (Bradley Dale) Peveto and Coach Bicknell,” Luke says. “Coach Bicknell was the WAC Coach of the Year, a head coach for eight years, been in the NFL for seven years and won a Super Bowl ring. One of my first calls was to Eli Manning.”

Seven days hasn’t given Bicknell much time to get to know his linemen. His first time meeting with them as a group was hours before the Rebels’ first practice Wednesday night, but one thing has already stood out about a unit that has all five starters back from last season.

“I’m like, ‘OK, here’s a big, good-looking guy. I’ll figure out who he is later,’” Bicknell says. “I’ve been very impressed with them physically.”

Hours together on the practice field will solve the unfamiliarity. For now, Bicknell’s main objective is to mold those physical traits while earning the trust of his new players with an approach that’s more conventional than the one that led him to Oxford.

“If you want to motivate me, show me that you care about me and care about my family. That, to me, motivates me,” Bicknell says. “I’ve never been one to say, ‘I’m just going to do this and don’t care what they say.’ I do care. I want to have a good relationship with those players because it’s meaningful. I’m going to be with these players more than my kids or my wife or anybody else. I think that helps motivate people.”