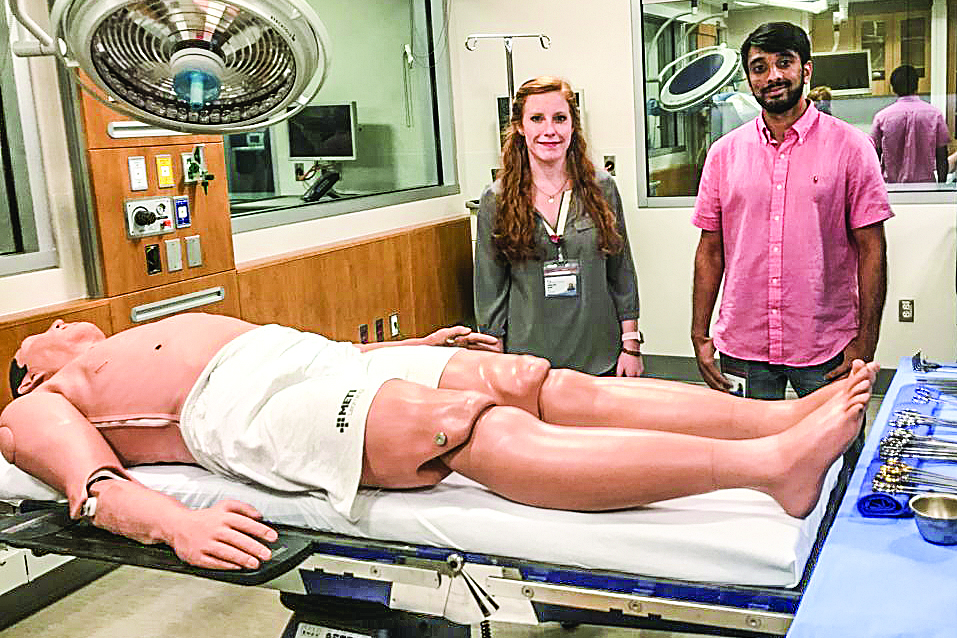 For Bonnie Beth Moore and many of her medical school classmates, taking notes in her first-year lectures was, literally, a balancing act. The tiny flip top desks in old lecture hall only measured eight inches across. Some students would set their laptops on the desk, then use their knees to hold a notebook.

Space outside the classrooms was hard to find, too. Quiet study areas were virtually non-existent. Sure, there was the medical library, but the medical students shared it with the schools of dentistry, pharmacy and nursing. Open seats were rare. Often, Moore said, she would drag her books home.

“We used to fight with the other schools for space in the library,” Moore said. “So I’d go home. And then you’d honestly get distracted by all the stuff there, suddenly you find yourself cleaning. Because we’re not just students. We’re real people with real lives.”

This acknowledgment that medical students live as much outside the classroom as in it has spurred the University of Mississippi to invest $74 million into a new medical school building. State bonds funded $64 million of the costs, with an additional $10 million from a HUD Community Development Block Grant through the Mississippi Development Authority.

The five modern, light-filled stories of blond wood and brushed steel will officially open their doors to students Aug. 14. And on each floor and tucked into each hallway are dozens of study areas, from lounges with couches to carrels and desks.

“It’s a priority for us to create healthy environments for our students,” said Jerry Clark, chief student affairs officer at the University of Mississippi’s School of Medicine.

Long gone are the days when a dean would welcome incoming first-year medical students by smugly warning them that one-third of their classmates would not make it to graduation. Dr. Loretta Jackson, vice dean for academic affairs at the medical school, says the school’s top priority is seeing every student to graduation.

“I can’t force somebody to stay, but if you need extra support or services, we will do what we can to make sure you stay,” Jackson said. “We know the process is difficult. We can’t change the process, but what we can do is make it bearable, and I think this (building) is a critical part of that and lifelong learning.”

“This is directly addressing that, and that’s part of the biggest thing that initially drove (the project). The governor said, ‘This is going to increase the flow of new physicians in Mississippi,’” Clark said.

For this reason, the medical school has also been increasing its class size, going from 110 first-year students in 2008 to 155 for the class of 2021. Next year the school plans to increase the size of its first-year class to 165 students.

A lot has changed

“In the last building, (a medical student) could really forget what season it is outside, so there’s a lot of light here, a lot of windows. It’s about uplifting resources for our students,” Clark said.

“You can imagine the difference in thought between now and 1955,” Rolph said, referencing the year the University of Mississippi built the previous school of medicine. “They weren’t thinking about these things back then.”

What they were thinking about in 1955, according to Rolph, was establishing the state’s first four-year medical school. Prior to that, the University of Mississippi’s Medical School was a two-year institution. Students would have to leave the state to get the last two years of their training.

“And they often wouldn’t come back,” according to Clark.

In 1955, the state built a hospital on the present location and began training doctors. As the medical curriculum changed over 62 years, classrooms and labs were added. But the result was far from cohesive.

“Calling it a medical school was almost a misnomer. It was a training hospital, and then there was a door that said ‘School of Medicine,’” Rolph said.

“There was not a medical school building. If I told you to go to the medical school, it would be kind of a head-scratcher,” Clark said.

Clark is quick to clarify that a lack of cohesive building hasn’t affected the quality of education medical students receive, calling the training students receive excellent.

But he acknowledges that the older facilities had hampered the school of medicine in other ways that can affect a school’s reputation. Admissions rates are higher and MCAT scores are lower than at many of the medical schools in nearby states.

“Our starting metrics are lower than average for many reasons, but mainly because we have a very small pool (of applicants),” Clark said.

Unlike private schools, the University of Mississippi’s medical school accepts only Mississippi residents. But students continue to leave the state to attend medical school elsewhere. And when those students go, Clark acknowledges, they often don’t come back.

“Some of our brightest prospects choose other medical schools because of shiny simulation labs and classrooms. So this helps us keep them in the state. In my mind, after you see this, you wouldn’t want to train elsewhere,” Clark said.

The crown jewels of the new medical school is arguably its simulated operating room, which allows students to learn about the rigors of surgery in a real world environment. It also can be used for real surgeries in the event of a natural disaster or other large-scale catastrophe, when an extra operating room is needed.

“It can be discouraging to be a student because you’re here to be a doctor, but then you spend your first two years in a classroom studying the basics,” Clark said. “So anywhere we can inject the doctor-patient experience, it’s uplifting.”

Moore, who has given tours of the new building, said from what she can see, the new medical school has had its desired effect on prospective students.

“Everyone who has come in so far has said, ‘If I saw this, this would be my number one school,’” Moore said.