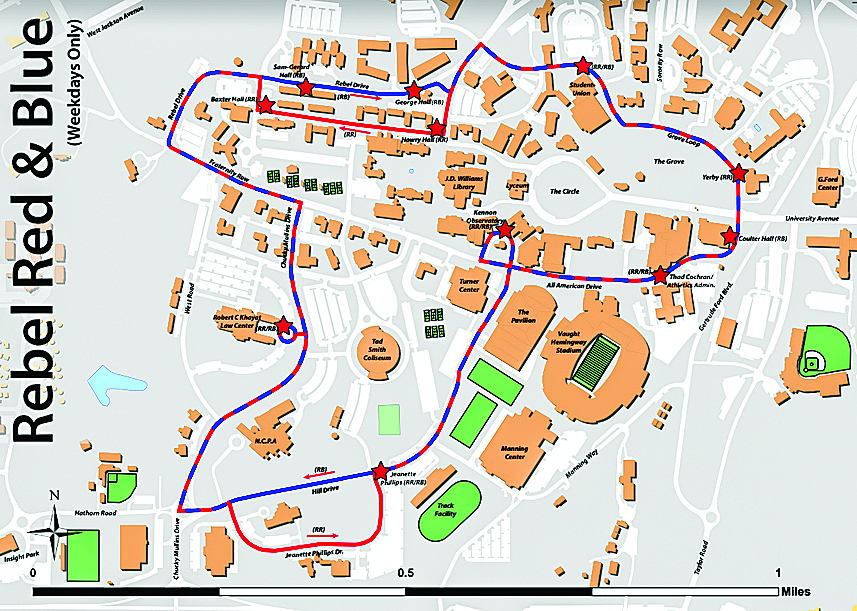 Several Oxford University Transit bus lines will change this fall; however, most of those affected are the routes associated with the University of Mississippi.

According to OUT Manager Ron Biggs, the implementation of new circular routes on the campus will change some of the existing route stops.

Starting Aug. 14, the Red and Blue lines, which serve South and North Lamar, University Avenue and West Jackson Avenue, won’t see major route changes other than they will only make one stop on campus at the Student Union.

The Brown Line has changed to the Bronze Line and will remain part of the park-and-ride route where students park at the Jackson Avenue Center – with a special permit – and ride the bus onto campus.

The Yellow Express has been changed to Hathorn Express to serve Campus Creek and Campus Walk residential complexes; however, it will serve the same stops.

All city routes will drop people off at the school’s two transit hubs on campus, Kennon Observatory and the Student Union. The Campus bus loop will then pick up and distribute riders throughout campus.

“All bus stops are within a four-minute walk from any location on campus and should make getting around campus much easier and it will also connect the outlying parking areas around campus,” said UM Transportation Director Mike Harris.

The Rebel Blue line runs clockwise and the Rebel Red line runs counter clockwise. Each route has two buses on them.

“We are in the process of adding shelters and ETA signs in all shelters that will communicate when the next bus is scheduled to arrive,” Harris said. “As always, one can take advantage of the Nextbus app and also get information on all OUT routes.”

Ole Miss faculty and students ride the bus at no cost. Other riders pay $1. Children, K-12, pay 75 cents with school ID. The elderly – 65 and up with proof of age and the disabled – with an OUT disability card, pay 50 cents.

Monthly passes are available at the OUT office located at 409 McElroy Drive and are $30 a month for adults; $15 for the elderly and disabled and $25 for K-12 students.