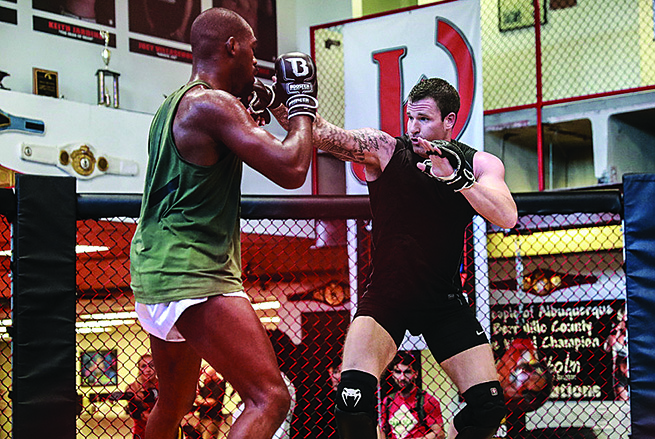 Former Ole Miss fullback Colby Landers had it made.

With a decent job working construction at a family-owned company in Arkansas it was a good life. He had worked his way up from a construction worker building houses in the summer heat to becoming an owner in the company and enjoying the air-conditioned office.

But then he decided to give it all up to make a drastic professional change.

“I told my parents I wanted to go get punched in the head for a living,” Landers said, laughing. “I think they were confused at first.”

The former Rebel fullback (2008-10) made a change and started on his journey to becoming a mixed martial artist (MMA). It was something Landers was slightly prepared for, wrestling years before with his older brother in the living room while they watched a rented copy of Ultimate Fighting Championships  1 (UFC).

But, just because he was roughhousing with his brother did not necessarily translate into him being a professional MMA fighter.

“I’d watch it, but I was a football guy growing up,” Landers said. “I never dreamed I would be doing this for a living now. I just fell into it and ended up being good at it.”

Before Landers stepped into the octagon, he spent time in the squared circle. With a black belt in Taekwondo, he competed as an amateur boxer and kick boxer while also competing in grappling tournaments in the American Grappling Federation (AGF) and National American Grappling Association (NAGA).

Landers accumulated the experience one needs to become an MMA fighter; he just did not have any actual MMA experience. He parlayed it all into a chance to join one of the top MMA schools in the world and learn from one of the top coaches in the sport, Greg Jackson.

While training at Westside MMA in Little Rock, Landers knew he had a short shelf-life starting his career late — he is currently 31 — and wanted to expedite the process. He saved up his money and made a phone call to the Jackson-Wink academy in Albuquerque, New Mexico.

“I knew I had to get in there and learn as much as could as quick as I could,” Landers said. “The tryout was brutal. I think they just wanted to test me and see if I had the heart to go through it. Coach Jackson and coach (Mike) Winklejohn, two of the best coaches, believed in me. The fact that they believed in me showed me that I can really do something with this.”

Landers made the team and used the money he had saved up to move to Albuqurque full-time and essentially lived in the gym for a year and a half. Fighting as a light heavyweight (205 lbs), he has won the only two fights in his young career and stands at a record of 2-0-0.

Beating up the best
His last fight was back in the spring of 2016, but not having any fights on his schedule did not mean Landers was sitting around the gym biding his time and training on his own. He also spends his time helping other fighters prepare for their own fights as a sparring partner. He just completed his most recent camp, preparing Jon Jones for the much-hyped and highly anticipated rematch with Daniel Cormier in last Saturday’s main event in UFC 214.

He got the call from his manager while in Arkansas and packed his bags and went to back to Albuquerque for what would become a grueling three-week camp with one of the world’s best fighters.

“I trained every day with (Jones),” Landers said. “Wrestling, sparring, everything. Every day and night. …It’s pretty much a dress rehearsal. Two or three weeks out, you’re sparring pretty hard.”

Landers and other team members would rotate rounds with Jones to give him a fresh look, preparing him. It was also a front row to witness Jones, who has battled obstacles outside of the cage over the past year, complete one of the biggest comebacks in UFC history as he defeated Cormier via TKO to reclaim the undisputed UFC Light Heavyweight title.

“We had to lift our game up to bring the best out of Jon,” Landers said. “That’s very hard to do because Jon is a very cerebral fighter. He’ll just pick you apart. We had to pretty much try to be the best DC we could be to simulate him. I think it just raised our whole gym up.”

Waiting game
Landers had been in talks with Bellator MMA for a potential fight but it has been pushed back several times with no expected date arriving on the horizon. He is a free agent and could also find his way on the UFC roster at some point if he could keep his winning streak going on other circuits. For that to happen he is considering not signing with any major organization presently and find a couple fights on his own and get UFC to become interested that way.

“My confidence is so high after competing with Jon,” Landers said. “Because you really get to gauge yourself where you stand because he’s clearly the best. …I learned a lot about myself and about my durability. …With that being said I’m ready to fight some fights now.”

Until then he will continue preparing for when that phone call comes or if he is needed to once again train Jones, who created a buzz after his fight with Cormier by challenging former UFC Heavyweight champion and current WWE superstar Brock Lesnar to a superfight.