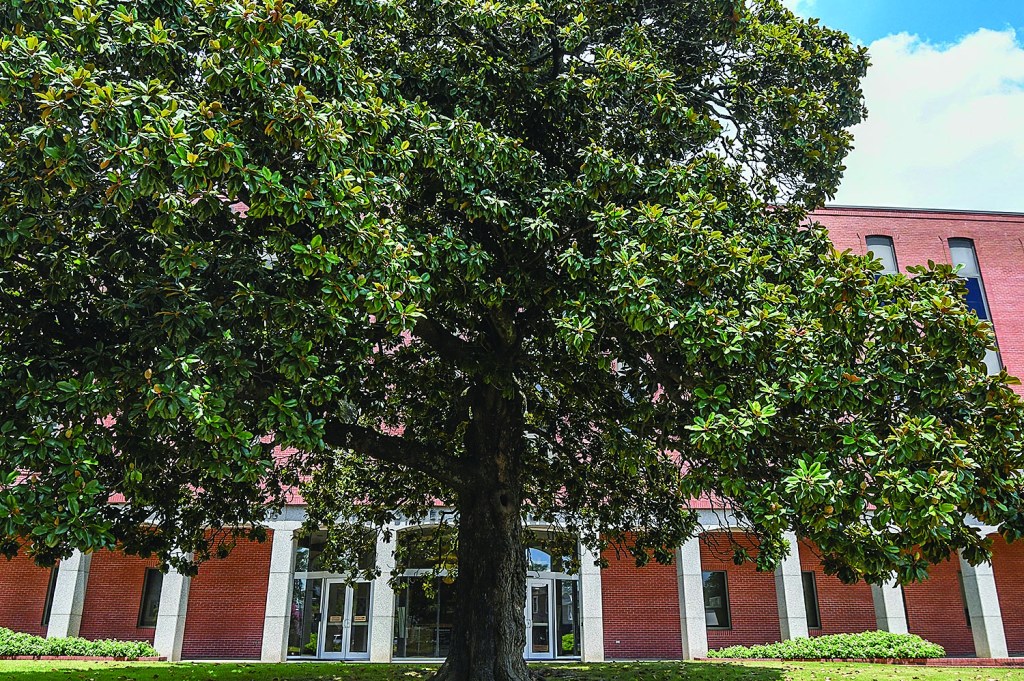 This magnolia tree was spared when the federal building in Oxford, was built in the early 1970’s.

My Mississippi tree book identifies Magnoliace as a family.  We call one of the common family names Southern Magnolia. This tree’s leaves are persistent, also are the sweet bays. The three deciduous leaf trees are cucumber, big leaf and umbrella.

These five Magnolia trees are found in numerous counties in Mississippi.

The Southern Magnolia is mainly planted for landscape due to their persistent shiny leaves, good growth and large white blossoms.

In 1938, Mississippi school children, with Legislative helped designated the Southern Magnolia as    Mississippi State Tree. This tree graces the front of the Federal Building on the Square.

Recently, I measured the three parts of the tree. Its height is 50 feet, the trunk’s diameter is 42 inches and the crown size is 45 feet.

It has been said, “its age is several years over 100 years.” Oxford grade school children played under its shade in the 1940s.

In the 1960s, the design of the new Federal Building was planned to sit next to Jackson Avenue’s sidewalks.

Nina Goolsby, then, Oxford EAGLE Editor, with the help of US Congressman, Jamie Whitten, had the design moved 60 feet to the rear.

Many thanks to her for saving this magnificent, historical, community tree.

During my employment with the USFS, we spent a couple of years in the early 1970’s on the Bankhead National Forest in northern Alabama. Part of my duties was in timber management.

One July afternoon found Jack Beck and myself, cruising timber in the Sipsey River watershed.

We had already offset our compass line because of massive rock bluffs.

Both of our canteens were empty. There, as large life, we spied a crevice in this rock wall. Spring water was oozing out, drop-by-drop.

Jack, who lived in the Bankhead area, spotted a Big Leaf Magnolia. He fashioned a dipper out of a leaf, which was about 18 by 25 inches. Our thirst was quenched. We filled our canteens and continued our cruising.  In the winter, I’ve seen massive icicles protruding out of rock crevices. Ain’t nature grand?

Coming a little closer home — my friend, Judy Young, shared, “Guy Turnbow’s mother and my mother were best friends. Mrs. Turnbow gave my mother a Big Leaf Magnolia seedling when we were living on South Lamar in about 1955.”

Recently, I found the tree. The property has changed hands and the new owners have taken good care of the Big Leaf. Standing, straight as an arrow, this tree is some 16-17 feet tall, with stems of about 3-4 inches with leaves, 18 to 25 inches long. Gazing at that Big Leaf, I felt a breath of fresh air.

Guy Turnbow’s house on University Avenue was built by a Pegues, an ancestor from Chesnee, South Carolina. This house might be the first or one of the first houses built in Oxford.

Guy’s ancestor also brought a Southern Magnolia seedling in a cigar box from South Carolina in the mid 1800’s.

I recently measured the diameter of three very old Southern Magnolias in Guy’s front yard. The three trees measured, 42, 34 and 33 inches. Most likely one of these arrived in Oxford in a cigar box.

The house’s front porch is about 50 feet from University Avenue. A mass of young Magnolias have taken root and have grown so close that we could barely squeeze between the small trees.

Sitting on the front porch, we could barely hear the traffic noise on University Avenue. As the trees are evergreen, this green buffer is a great silencer year round.

If you glance quickly at the Magnolia grove, in a small open space, you can read “1842—Magnolias.”

John Arrechea is an Oxford resident. You can reach him at jonlo@maxxsouth.net.