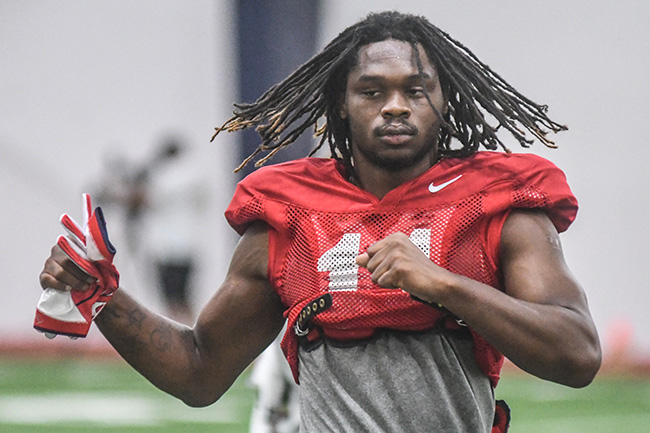 Ole Miss’ receiving corps is at it again.

The Rebels’ pass-catchers are getting the better of the defensive backs through the first week of training camp and may be performing better than any position group to this point. It’s the place interim coach Matt Luke went after the Rebels’ sixth practice Monday when asked if any particular players have caught his eye.

“Our receiving corps, they’re playing really, really well,” Luke said. “They made some plays in the red zone today, and I think they’re making the DBs better.”

Donte Moncrief, Laquon Treadwell, Cody Core, Quincy Adeboyejo, Damore’ea Stringfellow and former tight end Evan Engram are just some of the pass-catchers that have helped Ole Miss produce some of the Southeastern Conference’s top passing offenses in recent years, and strong recruiting has allowed the Rebels to keep talent stocked at the position despite that attrition.

Sophomore A.J. Brown and redshirt freshman DK Metcalf are stepping in for Adeboyejo and Stringfellow on the outside to complement sophomore Van Jefferson in the slot. Metcalf, the biggest receiver on the roster at 6-foot 4 and 220 pounds, showed his playmaking ability Monday with a one-handed catch over cornerback Jaylon Jones for a touchdown.

“We’ve got a lot of good receivers on this team,” Jones said.

Another receiver coming on in camp is DaMarkus Lodge, who’s had to bide his time his first two years on campus. The 6-2, 200-pounder enters his junior year with just 16 career receptions but is splitting reps between the first- and second-team offenses.

“He looks like he’s having fun out there,” Luke said. “He’s smiling, he’s running around, he’s making plays. That whole group has just been so unselfish. I’ve been very impressed.”

Freshman cornerback D.D. Bowie repped with the second-team defense Monday, an indication of how much coaches expect him to contribute this season.

Bowie, the highest-rated signee in the Rebels’ recruiting class, has a frame made for the position at 6-1 a 6-1 and 180 pounds. He showed his instincts Monday, intercepting a pass off a ricochet and returning it for a touchdown.

“He’s a long corner, and that’s what you’re looking for,” Luke said. “He’s just got to be able to focus in on every play because if you make a mistake at DB, you’ll give up a big play. With him, it’s just locking in and focusing, but he’s got a lot of ability.”

Jones, who’s getting first-team reps at corner, said he’s already helping Bowie with his technique knowing the newcomer is going to be on the field early this fall.

“I told him he’s going to get a lot of playing time because we need a corner like him,” Jones said. “We’re working on him because he’s going to be special.”

There are some position battles going on up front and in the secondary that Luke is keeping an eye on.

Senior C.J. Hampton and C.J. Moore are rotating at safety. Junior Breeland Speaks spent all spring as the starter at defensive tackle, but it was redshirt sophomore Josiah Coatney who repped with the first-team defense Monday.

Junior Jordan Sims started 10 games at right guard last season, but senior Daronte Bouldin rotated in there with the first-team offense Monday. Luke said there’s “absolutely” an ongoing competition for that spot and others.

“I think that’s what makes everybody better,” Luke said. “I think Daronte is having a great camp. Jordan is very, very experienced. … Everybody’s competing, but in the end, we’re going to need them all.”

Senior running back Jordan Wilkins suffered an apparent leg injury during Monday’s practice, but Luke said he wasn’t sure how severe it was afterward.

After an outside run during a red-zone drill, Wilkins limped to the sideline and didn’t return. He watched the rest of practice from there and moved around after taking off his cleats.

“I think he just kind of landed wrong or did something, but I’ll check,” Luke said. “I’m not sure (right now).”

Wilkins, who’s eligible again after an academic credits snafu caused him to miss all of last season, is the projected starter at running back. Sophomores Eric Swinney and D’Vaughn Pennamon took first-team reps in Wilkins’ absence.