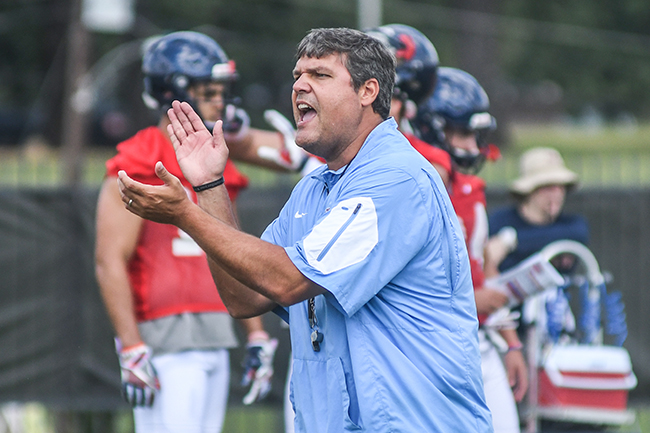 In the wake of Hugh Freeze’s abrupt resignation, Matt Luke had to rally Ole Miss’ players with his words in a hastily scheduled first meeting with them. He also had to start scrambling to hire another assistant to round out his coaching staff.

But the biggest challenge that came with the whirlwind of becoming the Rebels’ head football coach?

A fiery coach by nature, Luke’s emotions are amplified at Ole Miss, a place he’s spent 14 years of his life as a player or coach. He’ll be the Rebels’ interim coach for the 2017 season with a chance to stay on longer if he does enough this fall to get the permanent job.

Luke, who played for Ole Miss from 1995-98 and was on his second stint as an assistant for the Rebels before being promoted from his position as offensive line coach, considers it his dream job, but he’s trying to separate his emotions from whatever comes after keeping the focus on a team that’s dealt with one bout of adversity after another this offseason.

“I am an emotional person, so that will be there,” Luke said. “You can’t get too far ahead of yourself.”

Ole Miss athletic director Ross Bjork said he’s already gotten numerous calls about the head coaching position but echoed Luke’s thoughts on the here and now, insisting he won’t talk to anybody about it until he decides what direction he wants to go with the search.

That could include Luke, whom Bjork said would be “a great candidate.” Bjork said he’s not necessarily going by the number of wins this season but rather what the leadership and interaction with his fellow coaches and players is like from Luke, who’s taking over under unusual circumstances.

The discovery of what Bjork called a “concerning pattern” of personal misconduct involving calls made from Freeze’s university-issued cell phone to numbers linked to escort services forced his resignation July 20. That was on top of the NCAA’s long-running investigation into the program for 21 alleged rules violations, included 15 Level I charges, that has already resulted in the school self-imposing a postseason ban for the upcoming season.

More sanctions could be handed down after Ole Miss has its hearing with the Committee on Infractions this fall. Entering a debut season as a head coach that will be anything but normal, Luke said he’s sought advice from others — former bosses David Cutcliffe and Phillip Fulmer as well as Missouri’s Barry Odom, who, like Luke, didn’t have any head coaching experience until landing the job at his alma mater in 2016, to name a few — on how to approach it.

All of them offered the same advice.

“Be yourself,” Luke said. “Take what you’ve learned, but be yourself. Don’t try to be somebody you’re not. Be yourself and it will be good enough.”

But Luke knows making his case for the permanent job will have to include Ole Miss making enough improvements on the field to make a difference on the scoreboard. Six new assistants, including coordinators Phil Longo and Wesley McGriff, will try to help the Rebels turn around a defense that finished near the bottom of several national categories and an offense that, while explosive at times, became too reliant on the passing game during a 5-7 season last fall.

Players want to do their part, too, in trying to keep Luke around.

“I know one of our goals as a team this year and as a coaching staff is to go out there and give it our all and win as many games as we can so that he’s not a Band-Aid coach,” quarterback Shea Patterson said. “There’s nobody better to lead this team and this program than Coach Luke.”

But Luke isn’t thinking about what the future may hold for him. At least he’s trying not to.