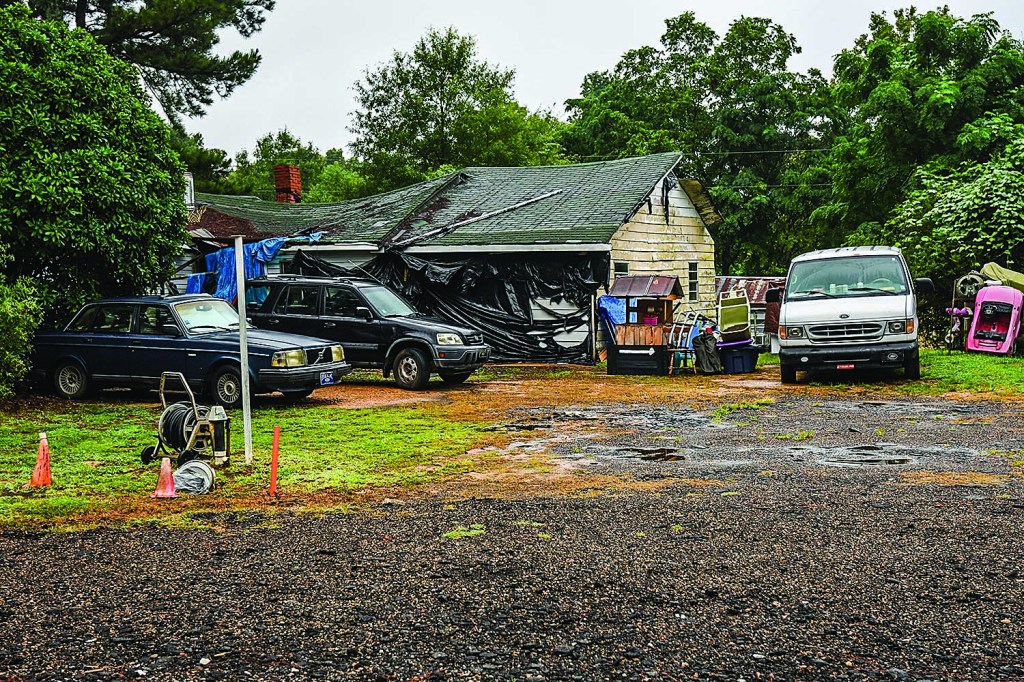 The Lafayette County Board of Supervisors is giving the owner of 12 Highway 334 45 days to remove a dilapidated house and make additional repairs and to clean up the property.

The Lafayette County Board of Supervisors is considering tearing down a dilapidated house on Highway 334 that neighbors say is unsafe and a home to vagrants and vermin.

Building Inspector Joel Hollowell told the supervisors Monday that the structure, located at 12 Highway 334, just east of the TOMB building, is more than just an “eye sore.”

“It’s covered in tarps and boarded up,” he said, showing the supervisors photographs. “The back of the house has just about collapsed. The roof has settled a foot from the flashing on the chimney.”

Hollowell said the property around the house is covered in debris and neighbors have reported seeing homeless people staying inside the house.

“They’re also concerned children in the area could try to go in there to play,” he said.

Board president Jeff Busby said he’s received several emails concerning the home and that the Mississippi Department of Health has also been sending copies of the emails by the concerned citizens.

“They say they’re puddles of standing water, mold, mildew and an increase of rodents, snakes, possums, and raccoon in the area,” Busby said, reading from some of the emails. “Those living near the property are concerned the rodent and snake infestations will spread to other nearby homes.”

Hollowell said the home has not had electric service since 2007.

The owners were contacted around 2012 by the county with similar concerns. At that time, Busby said property owners said they would demolish or fix the home.

“That’s four or five years ago and nothing has been done,” he said.

Two other houses on the same property owned by the same people are also in disrepair, Hollowell said, but are not currently at a stage to recommend condemnation.

Taxes on the property haven’t been paid since 2014.

County Attorney David O’Donnell said the land owner will be notified of the hearing and given the opportunity to speak to the board. Neighbors will also be given a chance to express their concerns to the board in person.

If the supervisors find the house is a danger to the public and vote to condemn the home, the county would go on the property and demolish the house and clean up the property. The cost for demolition and clean up would be assessed to the owner’s property taxes.

In other business Monday

•Approved the preliminary and final commercial site plans for several developments including renovations to the Providence United Methodist Church; B&B Concrete on County Road 101; 409 Rentals, Phase 1; and Mercedes Specialist of Oxford on CR 101.

•Granted the Road Department permission to enter private property in the Brittany Woods subdivision to fix a drainage issue; in the Tara subdivision to re-pour over a culvert and replace the right-of-way, and on 367 CR 321 to correct water run-off issues.