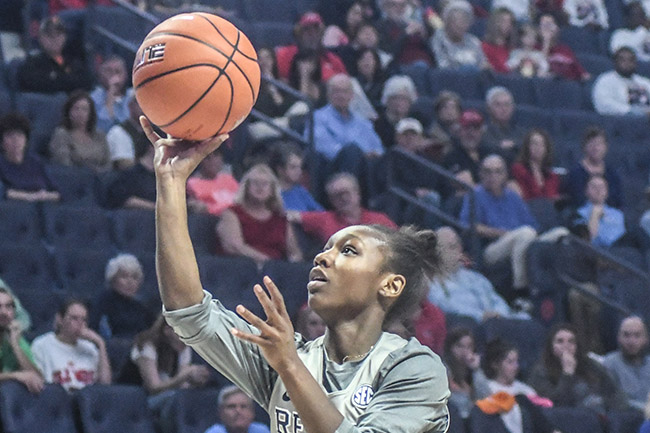 Ole Miss guard Alissa Alston (25) shoots against Tennessee at The Pavilion at Ole Miss in Oxford, Miss. on Thursday, January 12, 2017.

“I am looking forward to the challenges that our non-conference schedule will present our basketball team,” said Insell. “It was important to put a schedule together that would challenge our team and prepare us for a tough SEC slate in January and February. I feel confident that we have done that with our schedule and I am excited about what’s to come for this team.”

The 2017-18 non-conference schedule will see the renewing of the “Father vs. Son” rivalry as the Rebels will welcome Middle Tennessee, coached by Matt Insell’s father, Rick to Oxford on Nov. 29. Ole Miss will also travel to Chicago, hometown of junior Madinah Muhammad, for a tournament hosted by DePaul and will head to the city of Brotherly Love for a matchup with Temple.

“The road was a place we had struggles a year ago,” said Insell. “So putting our team on the road against good competition early in the season with the likes of Oregon, DePaul, and Temple was important to our staff. Renewing our series against Middle Tennessee also gives us a great opportunity at home to play against a team that will be picked to win their league and is always a program competing in the NCAA tourney.”

There will be plenty of opportunities for fans to see the Rebels at home as they have quality home dates with the likes of Troy (Nov. 21) Kennesaw State (Nov. 10), Arkansas State (Dec. 2), South Alabama (Dec. 9) and Southern Miss (Dec. 12).

The Rebels lift the lid on he 2017-18 season on Nov. 10 against Northwestern State at the Pavilion.

The SEC slate will be announced later this month.