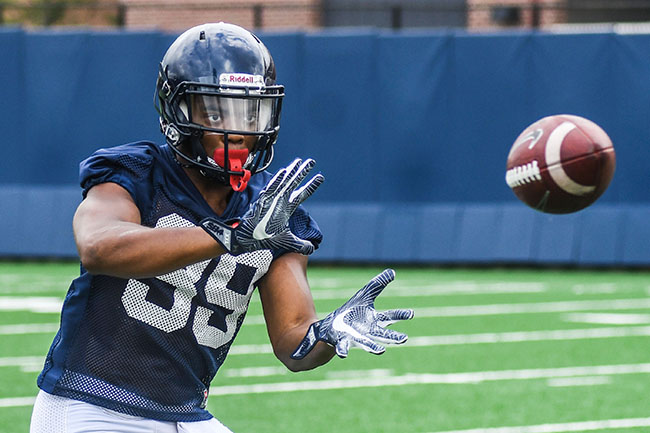 Ole Miss on Friday held its ninth preseason practice, which was open to the media for the first eight periods. Here are some notes from the open viewing periods:

• Ole Miss did a lot of mixing and matching with their first and second teams. DeMarquis Gates, Detric-Bing Dukes, Donta Evans and Jarrion Street all took first-team reps at linebacker. Jalen Julius, Jaylon Jones and Javien Hamilton rotated as the first-team cornerbacks.

• A sprained ankle kept Jordan Sims out of practice. Daronte Bouldin, who’s competing with Sims for the starting right guard spot, took all the first-team reps there during the open periods.

Left tackle Greg Little (concussion) was held out of practice for the third straight day with Rod Taylor getting the first-team reps in his place. The rest of the first-team offensive line remained the same with Alex Givens at right tackle, Sean Rawlings at center and Javon Patterson at left guard.

• Slot receiver Van Jefferson (knee scope) and running back Jordan Wilkins (minor knee injury) were also held out of practice again. Wilkins watched from the sidelines and worked out with a medicine ball during the open viewing periods.

Ole Miss will hold a closed scrimmage Saturday, its first of camp.

Video from the viewing portion of Friday’s practice is below.