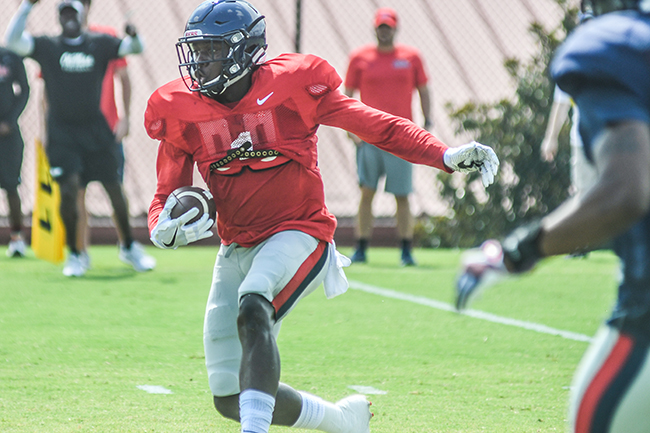 Phil Longo is worried about paring down Ole Miss’ running back rotation. There’s also the task of figuring out exactly how many offensive linemen will play once the games start Sept. 2.

One thing the Rebels’ first-year offensive coordinator isn’t worried about eight practices into training camp is his players moving fast enough to keep up.

Longo said the Rebels have gotten acclimated to the breakneck pace at which he wants to run his version of the Air Raid offense, something players have said is faster than anything they ran under former offensive coordinator Dan Werner and former coach Hugh Freeze.

“That’s always the emphasis,” said Longo, whom Freeze hired away from Sam Houston State to replace Werner in December. “That’s kind of where we start, but we’re not really coaching tempo anymore. They’re in the tempo.”

What Longo was mainly gauging at the start of camp was how well the players retained the information from the spring, which is when the base offense, which Longo said consists of 25 plays, was installed in just four practices. Wrinkles continue to be added, but the players are comfortable enough now with the plays and formations that they’re doing more reacting and less thinking.

“It’s a whole new tempo this year,” tight end Dawson Knox said. “I’d say the first week of spring was the most challenging, but right now everyone’s caught on pretty well and everybody’s moving at a pretty good pace.”

The benefits of having an offense that operates at warp speed is two-fold, said defensive coordinator Wesley McGriff, who’s also implementing a new 4-3 defense as a first-year coordinator. The pace is giving McGriff a chance to see who can make calls and get the defense lined up under pressure, something he hopes will pay off later.

“One thing we tell the defense is, ‘Listen, it’s going to slow down a little bit for you on game day,’” McGriff said. “We’re trying to put them in situations right now where it’s stressful, where everything is fast and they’ve got to make quick decisions. That’s one thing the offense is doing a phenomenal job of.”

The next step for the offense, Longo said, is to find a way to operate as efficiently when the elements start taking their toll amid long, hot practices. Not unlike most teams this time of year, that’s when the mental focus starts to wane.

“That’s easy when things go well and that’s easy when we’re fresh,” Longo said. “When it gets tough is when you’re playing in tempo, you’ve got to lock in mentally and you’re fatigued. That’s what we’re challenging them with right now is playing through it and be smart while we’re tired.”