Defense impresses during Chargers’ win over Charleston in Oxford jamboree 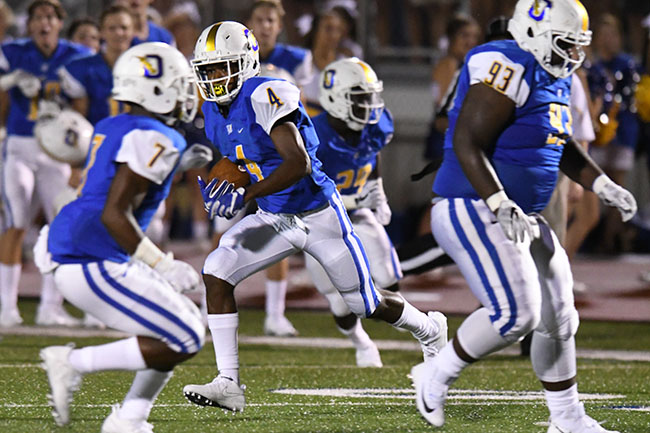 Oxford High's Damarion Parham (4) intercepts a pass against Charleston in a preseason jamboree at Bobby Holcomb Field in Oxford, Miss. on Friday, August 11, 2017.

It was only 24 minutes, but in what was basically a dress rehearsal the Oxford defense sent a message to Class 6A that they were for real.

Behind five takeaways, the Chargers defeated Charleston 14-0 in the Oxford jamboree at Bobby Holcomb Field on Friday night.

The format was two quarters of varsity action and one quarter for the junior varsity teams.

While the defense was in midseason form, the offense was shaky at best during the two periods. The only positive drive came in the final minute of play when Oxford marched 60 yards on five plays to score the only offensive points of the game. Running back Hiram Wadlington punched it on from 1 yard out after breaking off a 44-yard run earlier in the drive.

Before the lone scoring drive, junior quarterback John Reese McClure did not have his best night. Completing 5 of 11 passes for 13 yards and had one interceptions. He was also sacked several times behind an offensive line that has four new starters this season.

“A lot of it was due to Charleston playing well,” Oxford head coach Chris Cutcliffe said. “They’ve got a really good defense and fast up front. I think a lot of credit goes to them. I think we did knock a little rust off I hope. Breaking in four offensive linemen, we know there’s going to be growing pains there. But they fought and did a lot of good things.”

Wadlington finished the night with 10 carries for 68 yards and one touchdown.

Defensively, Oxford looked to be in midseason form. The first score of the game came off a Charleston fumble in the end zone by quarterback Dontarius Crosby when linebacker Jamar James landed on the loose ball midway through the first quarter. The Charger defense also had three picks, including ones from Jaquanzi Johnson  and Dechristian Cummings.

“I thought we played a lot of good defense,” Cutcliffe said. “Tackled well and really no busts defensively. … It’s something we make a big deal about, forcing turnovers. It’s the number one stat that determines wins and losses is the turnover battle. So, we talk about it all the time, and it was great to see us make it happen tonight.”

The regular season gets underway on Friday when Oxford travels to Vicksburg for the Red Carpet Bowl against the Gators. Kickoff is now set for 5:30 p.m. after originally being announced for 6 p.m.