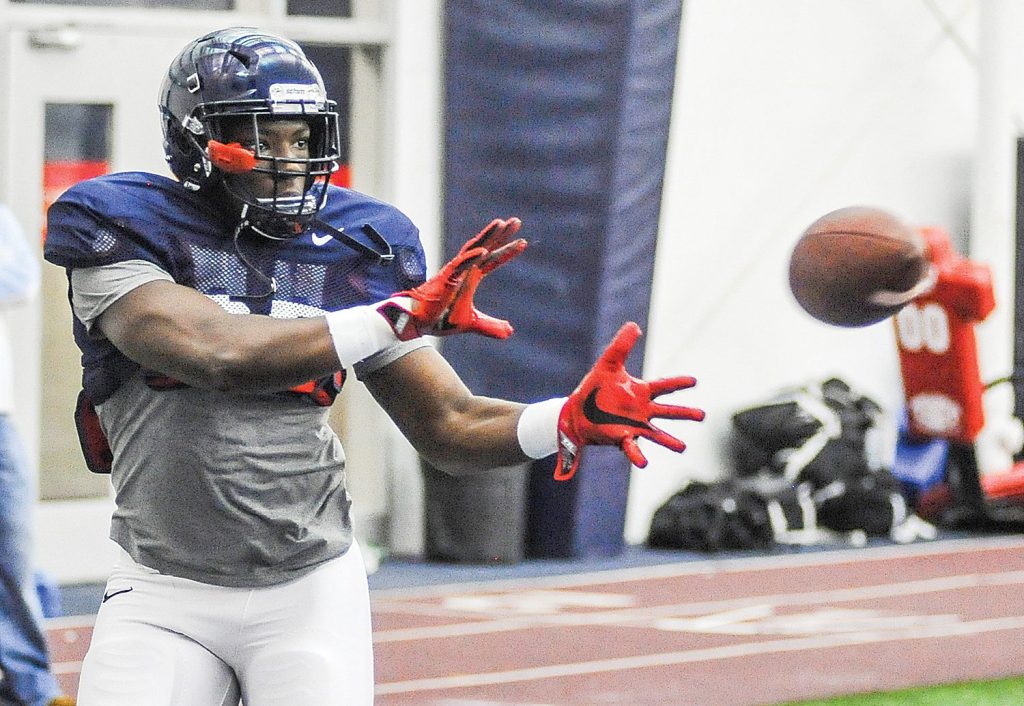 Coming off a redshirt year, Ole Miss linebacker Donta Evans is in line to start the season opener at middle linebacker against South Alabama.

He wasn’t crazy about it initially, but Donta Evans eventually embraced his redshirt year.

It’s got him more prepared to seize an unexpected opportunity in the middle of Ole Miss’ defense.

Evans is getting a majority of the first-team reps at middle linebacker during training camp. Junior Detric Bing-Dukes is rotating in as well, but he won’t play in the Sept. 2 opener against South Alabama after being suspended following his recent shoplifting arrest at Walmart.

Linebackers coach Bradley Dale Peveto said there’s still plenty of competition among his group, but Evans has made enough mental and physical strides to move to the top of the depth chart for now.

“I like where we’re at with Donta right now. The opportunity presented itself, and I think he’s stepped up and taken the bull by the horns.”

Evans was a consensus three-star signee in last year’s recruiting class but was buried on the depth chart behind more experienced players. That experience didn’t always show up during games as the Rebels struggled to get consistent production from the second level of a defense that finished 120th nationally against the run.

Watching the linebackers’ struggles from a distance only made going through a redshirt season harder for Evans, but he soon realized the positives outweighed the negatives.

“I put on weight, I got faster, I understood the game a little bit more and just improved overall as a player,” Evans said.

Up to 235 pounds on his 6-foot-1 frame, Evans is more physically suited to handle the rigors of playing in the middle of an SEC defense. Evans said the simplicity of first-year coordinator Wesley McGriff’s defense has made learning assignments easier as well, though he added brushing up on those has been his focus during camp.

“I can definitely see I’m understanding the football and defensive concepts improving from my redshirt year,” Evans said. “I just want to keep focusing on film and understanding the defense a little bit better so I can communicate and be a better linebacker.”

Peveto said being able to execute those assignments from one play to the next is the next step for Evans.

“That’s truly with all of us,” Peveto said. “Getting consistency down after down.”

Not only is Evans getting help from coaches in that regard but also from his main competition. With Evans in line to get the start against South Alabama in the middle, Bing-Dukes, who began his career at Georgia and played in 11 games with three starts in his first season at Ole Miss last fall, is doling out whatever pointers he can in practice to help the freshman.

“Detric has been a great help to me even though he’s not going to be playing in the first game,” Evans said. “He makes sure I know what I’m doing on the field. If I make a mistake, he lets me know. I can’t be more thankful for having a friend like Detric.”

Evans will take all the help he can get as he tries to take advantage of his time.

“I’ve got a great opportunity,” Evans said. “I’m just going to make the best of it.”