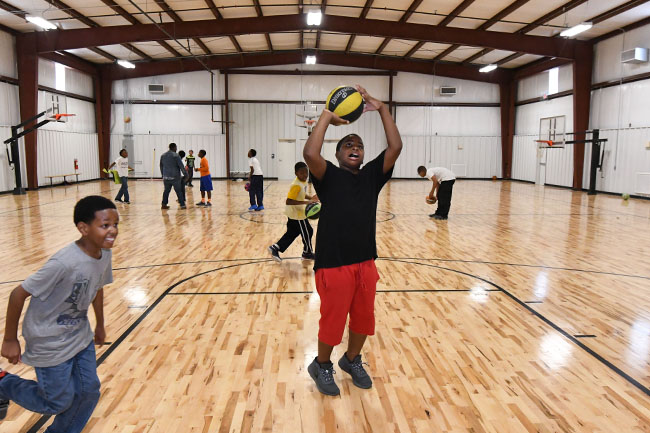 Taye Tallie plays basketball at the Boys & Girls Club earlier this year. The organization is asking the city of Oxford to contribute $15,000 to its budget. (Photo/Bruce Newman)

Oxford’s population growth has been well established and is no longer a surprise to anyone living or working in the city.

As more adults choose Oxford for their home, more children are filling up local schools and after-school programs, like the Barksdale Boys & Girls Club of Oxford.

Many nonprofit programs are upping their funding requests from the Oxford Board of Aldermen this budget season due to growth and cuts in state and federal funding.

For the first time since opening its doors in Oxford, representatives from the Boys & Girls Club are asking city officials to contribute $15,000 to the organization that would essentially help pay for the club’s utility bills for the year.

Stephen Monroe and Jared Myers, members of the Boys & Girls Clubs of North Mississippi LOU Advisory Board and Chief Professional Officer Zell Long, presented the aldermen will the club’s projected budget for the fiscal year 2017-2018 Monday during a budget meeting.

The projected revenue is $238,125 and expenses are $283,278. Most of the revenue comes from donations, grants and fundraisers. Long told the board some of the local grants were reduced this year, causing a shortfall in meeting the club’s expenses.

According to Monroe, the club has an average of 150 children each day.

“Last Friday, we had 190 kids,” he said. “This is fantastic, but it puts pressure on us financially. As attendance goes up, costs go up.”

Kids at the Boys & Girls Club spend time working on homework each day when they first arrive. They take part in various enrichment programs each and scheduled activities.

The aldermen have been going over budgets from city departments since last week and will continue into next week. Mayor Robyn Tannehill told the Boys & Girls representatives that after all budgets are finalized, the aldermen will then begin considering funding requests from nonprofits.

“Once we pay our bills, we’ll review our groups asking for money,” she said. “We have a lot of special groups who are asking for more money this year but we will see what we can do.”

One of the city’s largest expenses is the Oxford Fire Department that has a projected $4,793,003 budget with most of its expenses — $4,229,191 being in salaries, benefits and retirement payments.

Tannehill said the $50,000 for the new station would remain; however, the $25,000 for the training facility may have to wait another year.

Other budgets reviewed by the aldermen and mayor Monday included:

Oxford Conference Center is asking for $155,000 from the city’s two-percent food and beverage tax and the hotel and motel tax to help reach its projected $1.3 million budget. Most of the funding for the center comes from events and conferences held at the center.

Historic Properties Commission with a $108,000 budget.

The Yoknapatawpha Arts Council with a $374,820 budget

The Lamar development gets nod from the Oxford Planning…