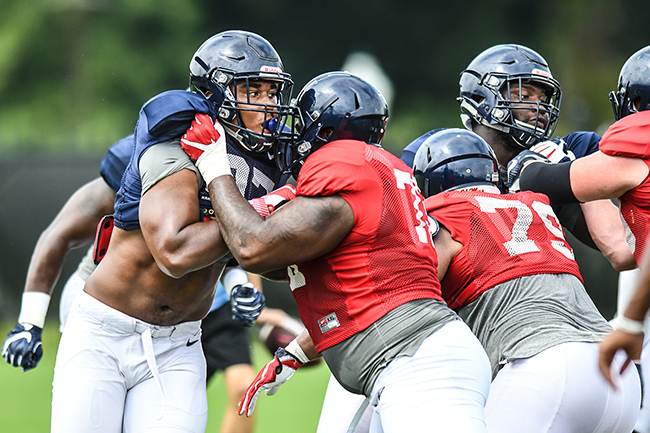 Qaadir Sheppard and Josiah Coatney each missed last season for different reasons, but the duo has the same goal heading into this one.

Both are fresh faces on Ole Miss’ defensive line looking to help the unit rebound from an underwhelming 2016. Coatney, at 6-foot-4 and 300 pounds, is a big body on the interior for a defense that was 120th nationally against the run last season while the 6-4, 253-pound Sheppard will try to apply more pressure off the edge after the Rebels finished 96th in sacks.

“I haven’t played in a long time, so it’s a great feeling getting back out there,” Sheppard said.

Neither is all that new to the defense.

A highly sought after junior college prospect, Coatney picked Ole Miss over Alabama coming out of Holmes Community College in the spring of 2016, but he was still rehabbing a torn ACL he suffered late during the only season he played in Goodman. Coatney went through training camp but said his knee only felt about 75 percent healthy, so he took a redshirt.

“Last year, I didn’t feel like I was completely ready, so I took a year off to get better and stronger and more acclimated,” Coatney said.

A native of New York, Sheppard began his career at Syracuse and played in nine games for the Orange as a true freshman in 2015. He didn’t finish the season on the field after being suspended for two failed drug tests, according to The Syracuse Post-Standard, and was eventually dismissed from the program for a violation of team policy.

“After everything that happened, I didn’t know what I was going to do,” Sheppard said. “I was just praying and hoping somebody would pick me up.”

Ole Miss was one of the first schools to reach out to Sheppard, who received a direct message on Twitter from former defensive line coach Chris Kiffin during the spring of 2016. It was enough to convince Sheppard, who sat out last season to fulfill NCAA transfer rules, though he admitted he didn’t need much of it.

“I ain’t want to talk to no other school because the SEC, it’s the best conference in football,” Sheppard said. “I was never offered by SEC schools (coming out of high school) and never thought I’d come down here to play SEC football ever in my life. Mississippi? I’m from New York. It was crazy.”

Both players said it was hard at times having to watch the defense give up chunks of yardage last season and not being able to do anything about it, but soon they will.

With a knee that Coatney said is “about as close to 100 as it’s going to feel,” he has spent most of training camp repping with the first- and second-team defenses but has exclusively worked with the first team ahead of Breeland Speaks in recent practices as the Rebels try to build depth up front. And there’s no mistaking what the primary job is for Coatney, who had 46 tackles and 8.5 tackles for loss in nine games for Holmes in 2015.

“I feel like I’m explosive and can really come off the ball, rush the passer and stop the run,” Coatney said. “I feel like I can bring a good run-stopping aspect to the defense that we really didn’t have last year.”

Sheppard counters Coatney’s bulk with speed, something coaches are hopeful will help him emerge as a much-needed secondary pass rusher to Marquis Haynes, the only player that recorded more than four sacks for the Rebels last season. Sheppard has worked as the first-team end opposite Haynes throughout camp after a strong spring that was capped with two sacks in the Grove Bowl.

For Sheppard, it’s about refining his technique.

“I’ve really worked on attacking one side of a man,” Sheppard said. “Instead of going straight at him, I attack half of him and try to just get around him with speed. Instead of using my power all the time, I’ve got use speed and my hands more.”

Their wait to make that long-awaited impact won’t last much longer.

“Those are two guys I think that are going to have an opportunity to make a lot of noise in this conference,” Roach said.