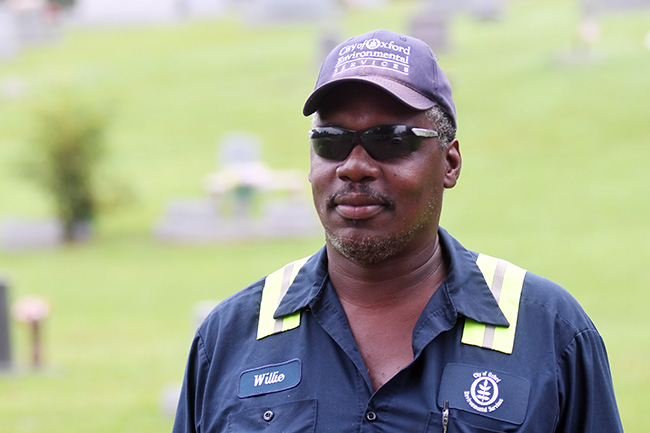 Willie Dennis, in Oxford, Miss. on Wednesday, August 16, 2017, was recognized at Tuesday night's meeting of the Oxford Mayor and Board of Aldermen.

Special to the Oxford Eagle

At Tuesday’s meeting with the Board of Aldermen, plenty of the usual city matters were discussed, but the Board’s recognition of one dedicated city employee largely stole the show.

Early in the meeting, Mayor Robyn Tannehill called Willie Dennis to the front of the room, explaining that in her short time as mayor, she has already had multiple members of the community reach out to her about Dennis.

“I’ve already gotten two letters on this employee, bragging about his wonderful effort and going above and beyond,” Tannehill said.

Tannehill read the two heartfelt letters aloud to highlight examples of Dennis’ exceptional service. The mayor said that she is “so proud that (Dennis is) an employee of the city of Oxford.”

The first letter was “a note of thanks, as well as a note of commendation,” and was written by an individual who was preparing to lay sod on a family member’s grave.

The individual said that Dennis stopped to see if he could lend a hand. Dennis then took the time to retrieve some special tools and help complete the task.

The writer called Dennis “very generous,” and offered to recommend Dennis for recognition as an employee of the month if the honor was available.

The next letter was written by a grandparent of a four-year-old girl who had unfortunately passed away. The writer’s son and daughter-in-law live across the country but wished to bury their daughter’s ashes in Oxford, where they met.

There was a mix-up with the family headstone and the girl’s marker, and the writer said that Dennis was right there with them for over three hours on a Friday and was also present the next Monday, helping to ensure that everything worked out.

“He was so helpful, kind, courteous, tender, thoughtful, and just so sweet,” the writer said. “Willie is a gem, and I hope you all know how fortunate you are to have him work for the city. His caring disposition truly meant so very much to me during such an emotional time.”

Dennis received a standing ovation as he humbly accepted his recognition, and Tannehill once again assured him how proud she was of his service to the people of Oxford.

After Dennis’ recognition, the Board discussed several other matters pertaining to the city, beginning with the first reading of an amendment to two sections of the Alcohol Ordinance.

The amendment would not change any substantive meaning of the ordinance, but rather it would aim simply to clarify requirements for on-premises dealers.

The changes to the two sections of the ordinance will help clarify that any business allowing beer or light wine to be consumed on the premises is required to have an on-premises retailer’s permit issued by Alcoholic Beverage Control.

The second reading of the amended sections of the ordinance will take place at the Board’s next meeting.

The Board also approved the request for permission to advertise for bids on two future projects.

The first project involves the West Oxford Loop Extension from Anderson Road to College Hill Road, while the second project is a road extension from Sisk Avenue to Highway 6.