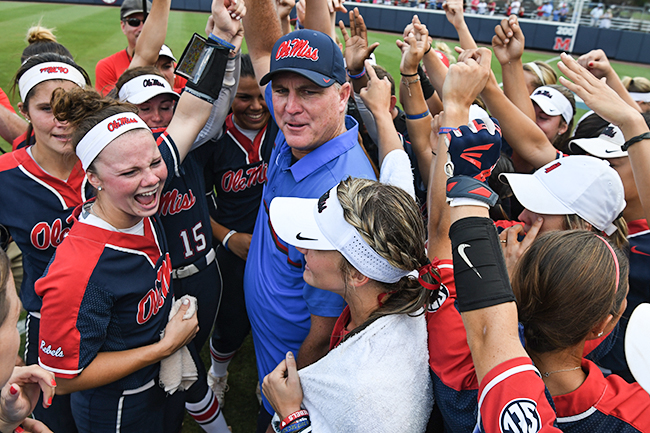 Smith’s contract on Wednesday was extended to the maximum four years allowed by Mississippi. Smith has gone 114-67 in his first three seasons at the helm and has led the Rebels to back-to-back NCAA Tournaments, the only tournament appearances in program history.

This past season saw Ole Miss set a single-season record for wins, become the lowest seed to ever win the Southeastern Conference Tournament, host an NCAA regional for the first time in school history and make to its first-ever super regional appearance. Ole Miss finished last in the Southeastern Conference standings in 2014 and had just three winning seasons before Smith’s arrival.

“What Ole Miss softball has accomplished in three years under Mike Smith is truly remarkable,” athletic director Ross Bjork said in a statement. “He has not only transformed Ole Miss into one of the top rising programs in the nation, but his squad has inspired Rebel Nation and introduced the sport to our fans. The future is very bright for Ole Miss softball.”

Said Smith, “Ole Miss is a special place with the best fans in the country, and I am fortunate to work with an incredible staff and group of quality young ladies and softball players that continue to represent this university the right way.”

Men’s golf coach Chris Malloy and track and field coach Connie Price-Smith had their contracts extended through the 2020-21 season Wednesday.

Malloy, a former Ole Miss golfer, has guided the Rebels to five tournament titles while overseeing nine individual championships in his three years at the helm. Ole Miss won four tournaments during the 2016-17 season and advanced to the NCAA Championships for the first time since 2001.

Sophomore Braden Thornberry capped the season with the first NCAA individual championship in program history under Malloy’s tutelage. Thornberry also won the Fred Haskins Award, which is awarded annually to the nation’s most outstanding collegiate golfer.

Price-Smith has coached the track and cross country teams for two seasons and already has led the Rebels to some unique feats, including the best NCAA men’s (fourth) and women’s (23rd) cross country finishes in school history and the best men’s (third) and women’s (12th) indoor track finishes ever. She’s also coached 42 All-Americans and 17 individual SEC champions while producing three individual NCAA champions.

“From national champions to historic team finishes, the Ole Miss track record book is being rewritten under Connie Price-Smith,” Bjork said. “We have not only improved in every area of the program but are emerging as a national contender. On and off the track, Connie’s team is setting new standards.”