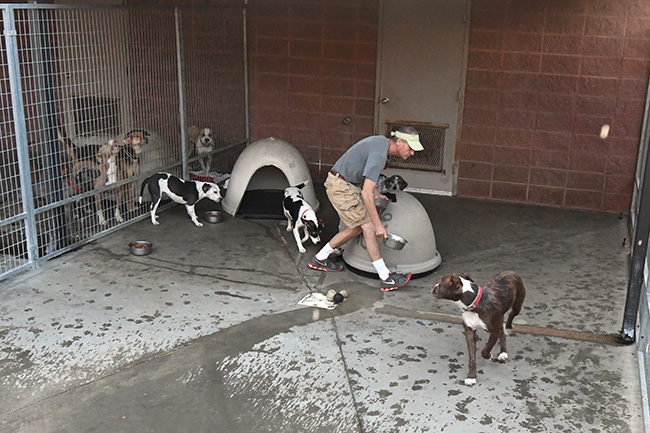 Dogs are fed at the Oxford Humane Animal Shelter in Oxford, Miss. on Thursday, August 3, 2017.

Before representatives with the Oxford-Lafayette Humane Society presented the proposed budget to the Oxford Board of Aldermen during a budget meeting Tuesday, Mayor Robyn Tannehill discussed moving forward with the contract between the shelter and the city of animal control services.

In the past, the aldermen and shelter signed a year-long contract for OLHS to provide animal control services.

However, after some recent allegations and findings from the Mississippi Secretary of State’s Office that the OHLS board was not following bylaws when it came to open meetings and elections, the aldermen will be considering a three-month contract that will be reviewed monthly after the three months until a long-term contract is considered.

Expectations in the proposed three-month contract include OLHS holding regular, open meetings with notice given as to the time, date and location of the meetings; conducting board meetings following Robert’s Rules of Order; and allowing the city and Lafayette County to attend the meetings as liaisons with their respective boards.

The city has appointed Alderman Janice Antonow to be its liaison and Lafayette County Supervisors appointed Supervisor Chad McLarty.

“Three months gives them time to attend the meetings and come back with recommendations and allow us to get into the process to see if there are other things we would need to add to a long-term contract,” Tannehill told OLHS Board President Cyd Dunlap.

The aldermen have not yet voted on the three-month contract.

Dunlap presented the shelter’s proposed budget to the aldermen, which asks the city for $139,220 for animal control services. According to the budget, the shelter took in 248 cats, 312 dogs and three other animals from inside the city limits. The shelter bases its payment at $112 for cats and $120 for dogs, to pick them up and house them for 10 days, whether the animal remains at the shelter for more or less than 10 days.

The total budget for OLHS is $474,186 with other funding coming from private donations, fundraising and shelter income. Lafayette County has previously contributed $25,000 toward the shelter. They have not yet approved an amount to give the shelter for the upcoming fiscal year as the county, like the city of Oxford, is still in the midst of their budget process.

OLHS adopted out 1,753 animals in 2016, transported 833 animals to rescues and 1,567 animals were euthanized for various reasons.

While the shelter takes in pets from several surrounding counties, it does not receive regular funding from those counties to house their stray animals.

Tannehill said the budget request will be considered when the board finishes its budget meetings and reviews the city’s entire budget. The city must approve a new budget for the fiscal year that begins on Oct. 1 by Sept. 15.

Other departments presenting their annual budgets Tuesday include: