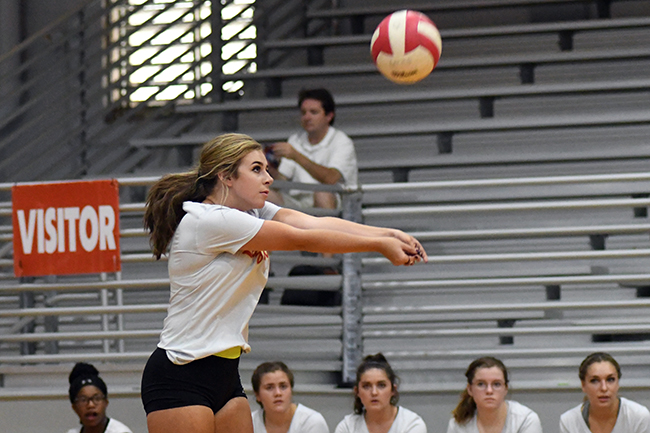 Water Valley is battling through youth, Lafayette is still trying to figure things out. Both teams met on the volleyball court Tuesday night in hopes of working through their kinks. It was the Commodores who emerged victorious with a 3-0 (25-22, 25-14, 25-18) inside the LHS Gym.

One of the issues Lafayette (3-2) is facing is learning how to finish. The Commodores consistently pulled ahead of Water Valley in each set but would allow the Blue Devils to inch back closer before claiming the frame.

“We still haven’t gelled, yet” Lafayette head coach Clint Jordan said. “It shows especially when pressure points are on the line. I feel like we’re one full well-played game from figuring it out. We’re really close.”

Lafayette’s losses have come from their season-opener against Oxford and a four-set loss to New Albany at home last Saturday. Their early-season wins have come against Corinth and Ripley.

The gelling issues were evident at times on Tuesday against Water Valley (1-1) when players would not be aware of their surroundings and collide into one another diving for the ball. Other points would see them diving for a ball, saving a point and then turning into a winning volley for them.

“We’re still playing like it’s preseason,” Jordan said. “Hopefully we can gel a little better in the coming weeks. We have a lot of girls who, are for the first time, seeing attacks in certain ways. Seeing how being a step behind causes you to block a ball out of bounds or hit the ball into the net or out. The pace of the game is where we’re not all on the same page.”

With only two seniors on the team, Water Valley is battling through some growing pains this season. The youth and inexperience has created some problems during their first two matches, which included a win over South Panola in their season opener last week.

“The only difference I see between us and (Lafayette) is they never gave up, our girls let up,” Water Valley head coach Allison McCain said. “Our hitters are just as strong as their hitters. We just got to quit giving up. …we’ve got a young team.”