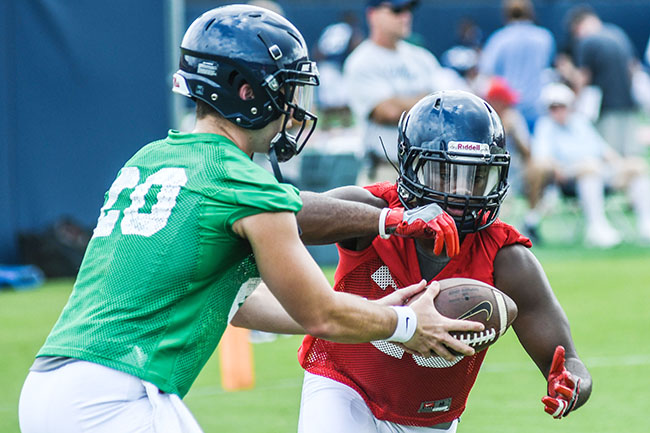 Phil Longo’s objective for the running game upon becoming Ole Miss’ offensive coordinator was to increase the physicality.

The Rebels have made progress through the spring and the first two weeks of training camp, but there’s still work to do.

As explosive as Ole Miss’ offense was during former coach Hugh Freeze’s tenure — the Rebels led the Southeastern Conference in passing each of the last two seasons — the ground game often struggled to provide balance. Ole Miss hasn’t finished better than middle of the pack in rushing in the league in any of the last five seasons and fizzled out a year ago, finishing with the third-fewest yards per game on the ground.

“I want to run the football downhill,” Longo said after being hired in December.

So it’s no surprise that’s been a focus throughout camp. There are also pieces in place that have coaches and players believing they can have more success doing it this fall.

Senior Jordan Wilkins, at 6-foot-1 and 217 pounds, has separated himself as the featured back that will run behind an offensive line returning all five starters from last season. Sophomores D’Vaughn Pennamon, the bulkiest back on the roster at 238 pounds, and Eric Swinney, a 5-9, 214-pounder that’s trying to stay healthy after leg and knee injuries cost him the last two seasons, have split most of the second-team reps in camp. Senior Eugene Brazley and junior D.K. Buford are also in the mix, though the two will likely be saved for certain packages with their speed.

Pennamon and Swinney have gotten more looks with the first team in recent practices with Wilkins being held out as a precaution with a minor knee sprain. Interim coach Matt Luke said with another deep group of wideouts led by A.J. Brown, DK Metcalf and Van Jefferson, the passing game should help the ground game’s consistency regardless who’s carrying the ball.

Despite the perception of the Air Raid offense, Longo’s version of it at Sam Houston State the last three seasons piled up rushing yards in bunches. The Bearkats led the Football Championship Subdivision’s Southland Conference in rushing in 2014 and never finished worse than 37th nationally.

A more rugged mentality from Luke, a former offensive lineman who coached the position before being promoted following Freeze’s resignation in July, is also starting to rub off, Pennamon said.

Luke said the Rebels averaged more than 5 yards a carry in their first scrimmage of camp Saturday, though he added he wanted to see how the offense responded during practice this week when the defense isn’t as vanilla. Longo said the backs have ripped off plenty of other long runs during camp.

It’s a good sign, he added, but it’s what the ground game produces when it’s not being explosive that Longo said could use some work.

“It’s like you carry the ball 10 times on power and you gain 100 yards in a game,” Longo said. “Ten reps for 100 yards sounds pretty good, but one of them went for 90 and the other nine went for 10. What we want to do is be efficient.

“We want to finish blocks better, but as far as being north and south and playing downhill, I like where the running backs are.”

Water Valley ready to play someone else as season…