Lafayette a part of history in season opener against Cleveland Central 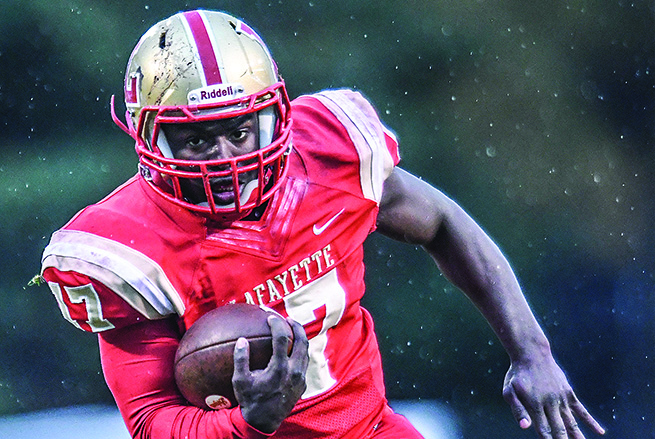 There is history being made in the Delta tonight.

After having two high schools in the town for years, Cleveland now only has. Cleveland and Cleveland East-Side consolidated over the summer to create Cleveland Central High School.
The Wolves — Cleveland Central’s new nickname — begin a new era by hosting Lafayette in the season opener for both schools.

While an honor to be the answer to a future trivia question, the challenge that lies ahead for the 2016 Class 4A state champions is preparing for a team that has combined talented players from two former teams. Add the fact that they have new offensive and defensive coordinators that are from two separate schools as well.

“We have four schools involved here, trying to decide what this one school is going to do,” said Michael Fair, head coach of Lafayette. “We’re taking this time to focus on us and get fundamentally sound.”

Trying to scout a team that is comprised of two former teams is something of a fools errand, especially the first week, when there is not any game film available of this.

“I think you could get yourself in trouble,” Fair said. “You get things in practice that you think could be successful against you. We learned a lot about ourselves last week against South Panola (during the jamboree).”

The biggest thing Fair learned was who will be his starting quarterback. Junior Brandon Turnage will get the nod tonight after having an impressive performance against South Panola last Friday.
During camp it was a three-man rotation — or battle —between Turnage, Drew Dabney and Randy Anderson. After Friday night, Fair declared Turnage his ‘QB No. 1.’

“His athletic ability is just way up there,” Fair said. “We felt between him along with Jamie Shaw and Jamarcus Quarles in the backfield that we had a lot of options.”

An issue that Lafayette discovered from their jamboree was their inability to tackle consistently. It was due to the fact the Commodores put healthy and safety first of their players first during the preseason camp the past three weeks.

“It’s a typical early-season deal,” Fair said. “Because it’s so hard to simulate full speed tackling in practice. Because, you don’t want to get anyone banged up in practice. That is one thing that we’ve been working on (this week).

Kickoff is set for 7 p.m. and will be the former Cleveland High School football field.