Oxford set to open their season at Red Carpet Bowl 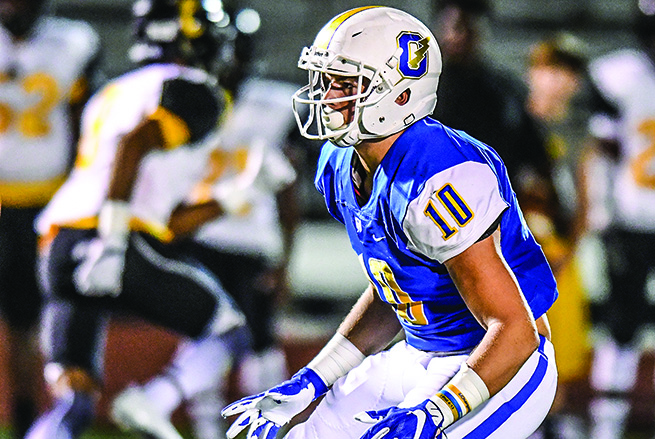 Oxford’s season begins tonight and they are rolling out the red carpet for the occasion.

In a manner of speaking.

The Chargers take on Vicksburg in the 2017 edition of the Red Carpet Bowl at Vicksburg High School. They are the first game of a doubleheader, which also includes Warren Central taking on Clarksdale.

With a start time of 5:30 p.m. It is an abnormally early kickoff for Oxford.

“It just kind of bumps your whole schedule back,” Oxford head coach Chris Cutcliffe said of moving the game up 90 minutes. “It doesn’t throw off our routine, really”

As for the game itself, it is the first time Oxford and Vicksburg have met since 2015, when the Chargers eliminated the Gators in the first round of the playoffs. First-year Vicksburg head coach Lorenzo Breeland decided not to swap film with Oxford, which leaves the chargers only their game film from two seasons ago and any film they could find of Vicksburg last season.

Joe Johnson is still the Gators quarterback is still Joe Johnson. Johnson — now a senior — played against Oxford in their playoff loss, which helps but it is tough to scout a player who is now two years older, better.

“They’re a talented football team and I think it starts with (Johnson),” Cutcliffe said. “They have a lot of talent around him …There is a little bit of an element of the unknown, but there is always some of that in the first game.”

Focusing on themselves
It is the first week of a 12-week season and every team is starting out without much knowledge of their opponent. That leaves Oxford to spend the first regular season week of practice on making themselves better.

That philosophy is something the Chargers are adhering to, The offense sputtered during last week’s jamboree performance against Charleston where at times with some new pieces in the offensive line and elsewhere were still trying to gel.

“That’s one of the things we talk about all the time and is that competing is really about doing the best that you can do and controlling what you can control,” Cutcliffe said. “That’s the mindset we always try to approach it with. We try to preach to our guys that if we can control everything that we can control then we’re going to be alright.”