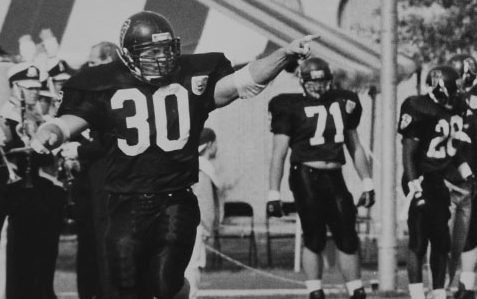 I read with great interest a recent column by Alex McDaniel titled “Why I, a hypocrite, won’t let my son play football”.

I first met Alex when I arrived at Ole Miss in 2012 and have the utmost respect for her as a mother and editor of The Oxford Eagle. But I am compelled to say in response that I sure am glad my mother let me play football. The game changed my life.

In her column, Alex described her love of the game and how it has been a passion of hers since childhood. She noted that the game conjures up the feelings of passion, family, and many other great things football can mean to her and so many others. She goes on to say based on the current state of football, both on and off the field, she will not let her son play the game. As a former college football player, athletics director and the parent of two young boys who might play tackle football one day, I believe this is a great game that has so much to give.

There’s no question the game of football faces challenges in regard to the safety issues Alex touched on but we are making a lot of progress in this regard. Safety of the game is a foremost concern and football is as safe as it has ever been, with better equipment, better coaching, better medical services, mandatory concussion protocols, more research, and certainly more awareness.

When I played football in the late 1980s and into the early 1990s, there were some safety elements in place but there was much less research, no mandatory protocols, and the term “CTE” was not part of the football vocabulary.

Currently, there are 2.1 million kids playing at the youth level and USA Football created a certification program for coaches to teach kids how to tackle and block the right way. Over one million high school students are playing football and the National Federation of State High School Associations publishes concussion guidelines for all sports. The overall philosophy is, “when in doubt, sit them out.”

We have more certified athletic trainers on site at youth and high school sporting activities than ever before. When I played Division II college football, we had two trainers and one team doctor, but now we have entire units dedicated to the health and safety of each player.

The NCAA recently eliminated two-a-day practices, and all institutions must have a concussion protocol plan approved by the NCAA Medical Director. Those of us entrusted as leaders in athletics know we must continue to make the game of football safe for all players and it is something we consistently work on as a top priority.

Our commitment to the game comes from the fact that many of us played football and love the game and understand how it can positively impact lives. For me, football began to teach valuable lessons at an early age.  I started playing organized tackle football in 5th grade in my hometown of Dodge City, KS. I look back at those formative years and wonder where else I would have learned to understand someone else’s opinion, communicate in a diverse environment, and work towards a common goal with other people who didn’t look like me.

Those 5th-grade practices and games seem like yesterday. It isn’t just the reminders of the smell of dirt and grass, but the essence of leadership and teamwork being taught to young men.

Another lesson happened in high school after an early season game of my junior year when I was the starting tailback.  After rushing for a whopping four yards in the second game of the season I was humbled in more ways than one.

A teammate’s parent approached me after the game and said I wasn’t running full speed when I carried the ball.  I was stunned but got the game tape from my coaches so I could see for myself.  Sure enough, I wasn’t running hard enough.  The lesson was simple but valuable: When you get the ball, always give it everything you’ve got.

I also had a life-changing moment from football in college while I was a student-athlete at Emporia State. I played for one of the toughest coaches in college football history. The late Larry Kramer was a hard-nosed former offensive lineman at Nebraska and my head coach. He routinely yelled at us or made us practice for more than three hours while running the same plays over and over until we got it right.

Practices were so hard we looked forward to playing games on Saturdays and found ourselves wondering at times if his techniques were fair. But I learned in those moments that if I could survive Larry Kramer’s program, I could survive just about anything.

This great game has impacted so many of us, teaching grit, toughness, teamwork, leadership skills, how to have vision, how to resolve conflict, how to be accountable and how to handle adversity. That’s why I am proud to identify myself as a football player still today.

That’s also why I believe this game belongs to tomorrow’s generation.

Ross Bjork is athletics director and vice chancellor of intercollegiate athletics at the University of Mississippi. Bjork played fullback for Emporia State in 1994-95.