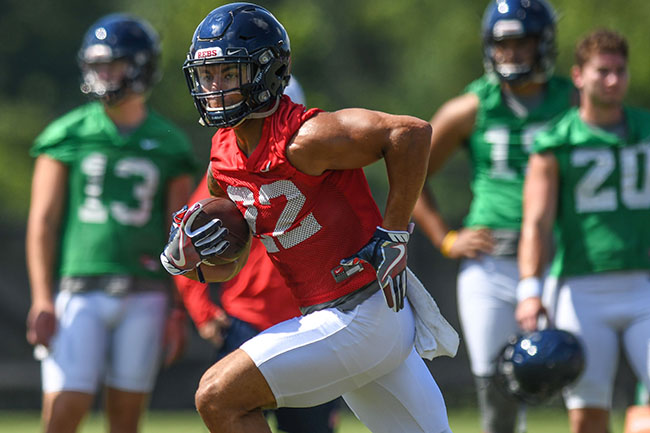 Jordan Wilkins is preparing himself to be the workhorse if that’s what Ole Miss needs him to be this season, so it scared the Rebels’ senior running back a bit when he thought he might miss another season.

Wilkins hobbled off the indoor practice field a couple weeks ago after tweaking his knee during a red-zone run. Wilkins, who missed all of last season after an academics credit snafu deemed him ineligible, feared his career at Ole Miss might be over.

“Just please don’t let it be bad,” Wilkins recalled of his initial reaction. “I came a long way and trained my tail off. I was just hoping it wasn’t anything serious.”

The diagnosis was a mild sprain and some bruising that kept the Rebels’ No. 1 running back out of some recent practices, but he returned to the field Friday. Wilkins said he’s about 95 percent healthy now and feeling “good.”

“I was a little stressed the last couple days, but I’m just happy to get back out with the team,” Wilkins said.

Wilkins and running backs coach Derrick Nix both voiced confidence in the depth the Rebels have behind Wilkins, which includes sophomores D’Vaughn Pennamon and Eric Swinney, junior D.K. Buford and senior Eugene Brazley. Swinney was held out of Friday’s practice after taking a recent hit to the head, but Nix said it’s not something that will keep the 5-foot-9, 214-pounder out long.

Nix said he wouldn’t hesitate to play any of them in a game right now with the first one off the bench depending on the situation. But Wilkins, who’s yet to get more than 72 carries in a season, said he’s been training to take on the bulk of the carries this season if needed.

“We’re going to really take advantage of what the defense gives us, and if it’s called upon for him to get 25 carries or more, he can do it,” Nix said. “If it’s 15 touches or whatever it may be, I think he’s trained and got himself in position to go do that now.”